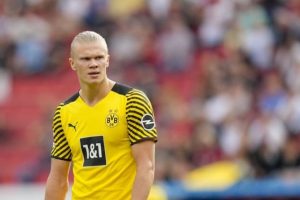 Erling Haaland looks set to leave Borussia Dortmund next summer and the whole of Europe are on standby to secure the 21-year-old, but La Liga president Javier Tebas may have sent a warning to potential suitors, including Manchester United and Liverpool.

Erling Haaland is on the radar of every big club in Europe as the Norwegian star looks set to leave Borussia Dortmund next summer.

The 21-year-old has become one of the biggest names in world football, and will be available for £68million at the start of next summer due to a clause in the striker’s current contract.

The superstar has the rare luxury of being able to choose where he plays should the Norwegian leave Dortmund at the end of the season, and Premier League sides have been hopeful that Haaland may follow in his fathers footsteps and play in England.

However, La Liga president Javier Tebas has other ideas.

La Liga lost one of the biggest stars in the history of football this summer, as Lionel Messi ended his 21-year stay at FC Barcelona to join Paris Saint Germain, following Sergio Ramos to the French capital.

Eager to bring a global superstar back to La Liga, Real Madrid attempted to sign Kylian Mbappe but failed in their approach, and are determined to secure the Frenchman’s services next summer after PSG turned down a world-record £189m bid.

Despite focusing on a deal for Mbappe, Tebas has confirmed that Los Blancos have enough money to sign Haaland as well as the French star, with La Liga looking to bolster their league once more.

Tebas told Cabena COPE: “They [Real Madrid] have sold €200 million worth of players. They have enough money to sign both Mbappe and Haaland together. They have not lost money. On top of that, they have sold assets.”

La Liga saw their value decrease overnight following the departure of Messi, and their desperation to sign new stars will worry Premier League sides such as Manchester United and Liverpool, who have both been linked with a move for Haaland.

United may have signed Cristiano Ronaldo this summer, but their no.9 problem has only been temporarily filled, and Liverpool aren’t far away from facing a similar issue themselves.

Liverpool may have fielded one of the most terrorising front threes in football history with Mohamed Salah, Roberto Firmino and Sadio Mane helping their side achieve Premier League and Champions League glory, but they’re all 29 and Jurgen Klopp will have to delve into the transfer market in the near future.

Manchester City are also desperate for a natural centre-forward and Pep Guardiola’s side could attempt to sign Haaland after they missed out on summer target Harry Kane, who was denied a move by Tottenham chairman Daniel Levy.

Of course, it’s up to Haaland where he moves should he desire an exit away from Dortmund, but the desperation and determination to secure a deal for the Norwegian could see the 21-year-old head to the Bernabaeu and deny a move to the Premier League.

The British sides will be holding on to the hope that Haaland desires a move back to England however, as the Dortmund ace was born in Leeds, with his father playing both at Elland Road and for City during his own career.

Haaland could join any of the interested Premier League clubs for different reasons, as Ole Gunnar Solskjaer is also Norwegian, Klopp could develop the striker further as both share an understanding of Dortmund, or he could follow in his father’s footsteps and play for City.

Alternatively, Haaland could replicate Robert Lewandowski’s career path and be the latest player to switch Dortmund for Bayern Munich, with the Polish superstar nearing the back-end of his career.

Regardless of where Haaland chooses, whoever signs the generational talent will have a striker for potentially ten years and it could turn out to be one of the great signings.

It’s only a matter of time until we learn the fate of Haaland’s future, but it sets up to be an almighty scramble next summer as the European elite battle for his signature.