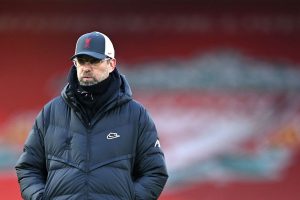 It's been a season that has fallen far below expectations at Anfield amid a swathe of unforeseen problems and difficulties.

From a depleted defence, to a glut of injuries, and an inconsistent front line, Jurgen Klopp has had to juggle all manner of issues to try and keep his side on track.

But possibly his greatest headache could still be yet to come, due to the uncertain future surrounding the player he believes has been his most dependable performer this season.

Liverpool welcome Chelsea to Anfield on Thursday night with their squad boosted by the return of Fabinho, who offers Klopp the option of making a slight amendment to his line-up.

But it is not the Brazilian who Klopp feels has been his trusted ally.

"Both [Fabinho in defence and midfield] is possible," Klopp told a press conference, when asked how his team would set up against Chelsea.

"If we can find a way to play [him] in midfield, that would be helpful.

"Most consistent player this season is [Georginio] Wijnaldum, 6 ,8 but with Fab in 6 would be helpful. We will see. Both positions are intense."

At times when Liverpool have been all at sea this season, it has been Wijnaldum who has held the fort.

All the latest big football stories, transfer exclusives, hard-hitting analysis and unmissable features will be sent directly to your inbox every day.

He has racked up the joint-highest number of appearances amongst his peers – level with only Mohamed Salah and Roberto Firmino (though Andy Robertson has more minutes under his belt).

But more telling has been Wijnaldum's contribution in those appearances, as Klopp mentions, fulfilling the duties of a holding midfielder in the No.6 role, or as a more advanced No.8 with his tireless running.

In a campaign where Thiago – the man whom many thought had been brought in to effectively replace him – has struggled, Wijnaldum has served both positions with distinction.

Which makes it all the more inconceivable that Liverpool are yet to budge on their contract stance, with the Dutchman now into the final three months of his contract.

Wijnaldum wants parity with some of the world's top midfielders and the top stars at Liverpool, both in salary and the length of his deal.

Liverpool have set their bar at just a three-year extension for the 30-year-old, with talks now at a standstill.

Despite interest from Barcelona, unconfirmed reports in Italy claim Wijnaldum has already verbally agreed a deal to join Inter Milan on a free transfer when his contract on Merseyside expires.

Whether that be the case or not, for Klopp, he now faces losing the most consistent player in his ranks – at least this season – which will usher in the start of what appears to be the next cycle for his Liverpool team.

Should Liverpool meet Wijnaldum's contract demands? Have your say below.

As Jamie Carragher told Sky Sports Super 6 last month: "Yes, I think he [Wijnaldum] has been brilliant this season.

“He will may be one of the first big players to leave really who has been there through this success of Jurgen Klopp. That’s what will happen over these next few years.

"That team who have won the league, the Champions League will be broken up, each year maybe one or two might move on, new ones come in, so I think that might be the start of the process.

"Yeah, it will be sad to see him go. He is 29, he obviously wants a new contract, club don’t think he is worth that money in terms of wages. It’s difficult really, you can see both sides of the argument."