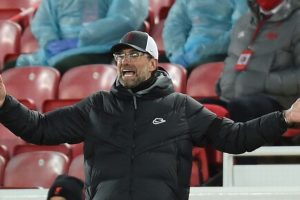 Jurgen Klopp has bluntly told all his players they are simply not wanted at Liverpool, if they are considering leaving should the team fail to qualify for the Champions League next season.

But the Reds boss passionately stated that he knows every single member of his squad well enough, to trust that they will all – including Mo Salah – have the loyalty to stay and put things right next season.

Speaking candidly for the first time about the apparent crisis which has engulfed the club, Klopp addressed many situations, stating:

Speaking about the prospect of missing out on the top four he said “If a player wants to leave because we don’t play CL then I don’t want him.

“If a player does not want to come to us because we don’t play Champions League next season, then I don’t want him.

“And It is not a personal thing, but it is always like this. You always need to find the right squad for the challenges you face. Then you go for it. It is nothing I worry about.”

And that includes Salah. The forward was visibly angry and upset when he was substituted just 62 minutes into the devastating defeat by Chelsea, and petrol was added to the fire of that controversy by his agent the following morning.

Salah’s representative Ramy Abbas Issa tweeted a single full stop on his timeline, and many Liverpool fans interpreted that as a dire warning about the player’s future at Anfield…that it was the end.

Klopp though, insisted his top scorer is happy: “These kind of stories, they didn’t happen. I can not guarantee it for the future, for all time, say it will never happen, but these kind of discussions never happened,” he said of suggestions Salah is unhappy in any way.

“You get subbed, you are a striker and you think you should stay on the pitch. That's not an issue, it is just normal life. Mo is in a good mood – it is not a problem.

“I make the decision, the boys accept it – nobody feels they have nothing to do with the situation, that they are not responsible for it. I don’t do that, the players don’t do that.”

And Klopp insisted that EVERYONE at the club – including Salah – is totally committed to the cause of solving the crisis. He also explained that the owners trust him to sort it out next season.

“We all know we came together to the top, and now we have come together here – and we will sort it together. That's our idea of it, we all fight together now…all the boys feel that,” he said.

“I know we have loyalty from the players.I don’t feel that the team leaves me alone, standing in the fire.

"It is not a situation where a player in the squad says we are not in the Champions League so I have to leave. That will not happen. I know them well enough to know that.”