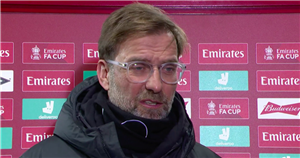 Jurgen Klopp is ready to step up the intensity in Liverpool’s training ahead of their showdown with Manchester United.

The Reds have been out of sorts of late and hardly eased concerns against Aston Villa’s kids, whose team had an average age of just 18.

Liverpool were held for an hour against a Villa team full of teenagers from their academy, with the first-team and manager Dean Smith self-isolating after a Covid outbreak in their camp.

Louie Barry even grabbed a goal against a strong Liverpool team before the break, but a quick-fire three goals in the second period eventually saw the visitors win 4-1 at Villa Park.

The Premier League champions are through to the FA Cup fourth round, but their attention now turns to the top flight and taking on Ole Gunnar Solskjaer’s United.

The Red Devils have become genuine title contenders and will go into the game with Liverpool three points clear at the top if they win their game in hand against Burnley on Tuesday.

On the nine days that Liverpool have to prepare for the United clash, Klopp said after the Villa triumph: "Exactly and that's what we will do.

“Very important. We have a lot players with no rhythm.

“So we will do a lot of 11 v 11 situations [in training] because that's a very important thing for football players that we couldn't give them too often.

“Now we have the time and will use it for that yes."

The Liverpool boss admitted he is not happy with the team’s lack of momentum off the back of a goalless draw at Newcastle and 1-0 loss at Southampton over the New Year period.

Klopp added: “(We have) problems in passing and moving against a deep defensive side.

“Too many on the wrong side of the ball for the passes – not enough receivers. We had situations, crosses, chances and shot the ball directly at the goalie – we changed that.

"It was a bit a rusty start but better in the second half."

On their rustiness against Southampton too, he claimed: "That's different. It's a similar problem.

“Against Southampton [1-0 defeat] from the first second they were more on the pitch than we were but that was not the case today. There's not a lot to win apart from going to the next round and that's what we did."