Liverpool manager Jurgen Klopp has confirmed his side will be without first choice goalkeeper Alisson Becker for at least ‘a couple of weeks’ following a calf injury picked up against Norwich.

The Brazilian went down after a routine clearance, in some considerable discomfort while holding the back of his right leg. He was substituted for new signing Adrian immediately as a result.

Sportsmail’s exclusively revealed on Sunday that Alisson was looking at an eight-week stretch on the sidelines, after being assessed at the club’s Melwood base. 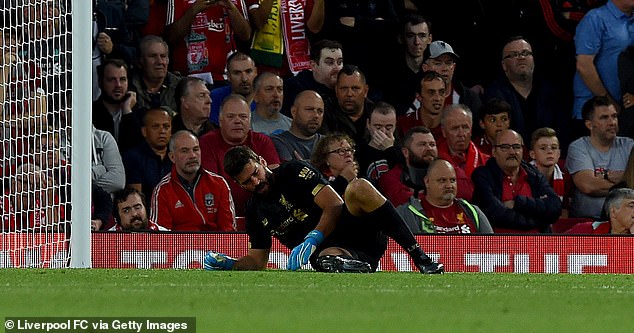 Speaking on the injury after the first set of scans, Klopp said: ‘[It’s] Not too cool. It’s a calf injury which takes him obviously out for a while,’ he told the club’s official website.

‘I don’t want to make now [an] exact prognosis on when he will be back but it will not be Wednesday for sure, so now then we have to see. It takes a while, it takes a couple weeks for sure, and we have to see.

‘I saw already like ‘six weeks’ and stuff like this, but Ali was not a lot injured in his career so I would like to wait a little bit to see how he develops in that process now, but he is not in for the next few weeks.’

Spanish goalkeeper Adrian is in line to make his first start for the Reds, just nine days after signing for the club as a free agent.

The former West Ham stopper was signed by the Reds following the departure of Simon Mignolet to Club Brugge, and was afforded a warm welcome by the Kop as he made an unexpected debut.

Liverpool have been bare in the goalkeeping department, and needed to take Andy Lonergan, the former Preston and Middlesbrough man, on their United States tour due to Caoimhim Keheller (wrist) and Vitoslav Jaros (elbow ligaments) being injured.