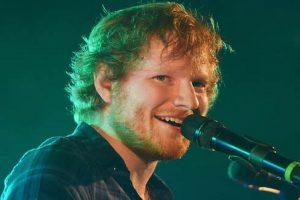 The Three Lions squad had a surprise visit from Ed Sheeran to their St George's Park training camp after captain Harry Kane invited him to meet the players.

And Trippier admits Sheeran's arrival caused such a song and dance that the chart-topping star has become England's lucky charm.

Sheeran enjoyed a barbecue with the squad and coaching staff and treated them to some renditions of his biggest hits that have made him one of the most successful artists on the planet.

Sheeran played his acoustic guitar and even belted out cover versions of other famous tunes, finishing with a chorus of 'Three Lions'.

Trippier admitted meeting Sheehan gave the team such a buzz it helped them brush aside Germany and then Ukraine to storm into the semi finals of the Euros.

The Atletico Madrid ace said: "We had a barbecue. H had sorted it out for us. He came in, we were sat around, like we are doing now. It was surreal, really, having a barbecue and Ed Sheeran is sat next to you playing his guitar!

"The best thing about it was he was going from one table to another table, he was speaking to everyone. We were asking him questions, and he was talking to us. I think it was good for him, also. You know, it brings you together as players. Ed Sheeran is singing, you are all singing along with him.

Do you think England will beat Denmark to reach the Euro 2020 final? Let us know in the comments section.

"It was just a great night; a great occasion. We just needed it at that moment. Ed Sheeran comes in, the boys are singing songs and everyone is buzzing, having a good time. It just brings you all together.

"We play Germany, we play fantastic. We play Ukraine and the lads do unbelievable again. We've now got another big task in front of us against Denmark."

England's success has been built on a rock solid defence that has still to concede a goal in the tournament.

Trippier reckons the challenge of facing the likes of Kane, Jadon Sancho, Jack Grealish & Co in training has left them no choice but to be on top of their game when it comes to snuffing out dangers.

He said: "In training we do a lot of defensive work, where you are stopping crosses and your positioning is right. We've worked really hard on it.

"As you can imagine, when you are a defender up against Sancho or (Marcus) Rashford, (Phil) Foden, Grealish, (Dominic) Calvert-Lewin, you can imagine it's tough!

"Bukayo (Saka) ran past me the other day and I felt like grabbing him and saying 'where are you going?'. "But we have so much talent. When you train against these players everyday – when you get on the pitch against the opposition, because the players we've got are world class, you are ready.

"When you train against these guys every day there are no fears. I spoke to some of the younger lads before the tournament and said, have no fears.

"Enjoy it because they are only around every couple of years these tournaments. You need to enjoy yourself, just have that freedom and you don't need to prove to anybody how good you are, just express yourself, enjoy it. That's the most important thing."