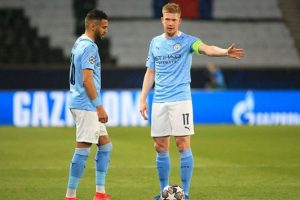 Manchester City secured a huge 2-1 away win over PSG on Wednesday as both sides look to break their Champions League duck. A huge talking points was Riyad Mahrez’s match winning free-kick, which many had expected Kevin de Bruyne to take.

Kevin de Bruyne has revealed all on the chat he had with Riyad Mahrez before the Algerian scored the match winning free-kick for Man City.

The Sky Blues edged out PSG in the first leg of their Champions League clash in Paris on Wednesday night with a 2-1 win.

Marquinhos’ early strike gave the hosts a 1-0 lead at half-time, but De Bruyne pulled one back just after the hour mark as his cross found the back of the net.

Just over five minutes later he found himself standing over a free-kick alongside Mahrez in a superb position to score.

JUST IN: Man Utd’s Haaland transfer hopes may have been hurt by Man City win 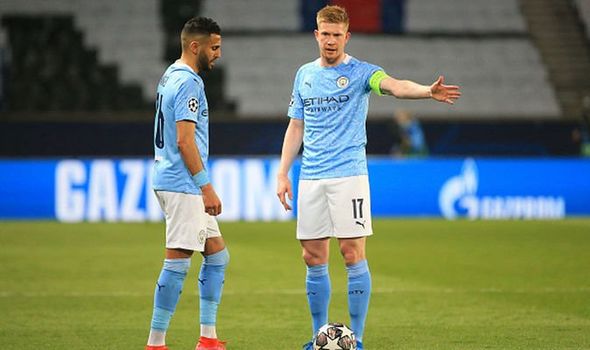 Many thought the Belgian would be the one to strike it, but Mahrez stepped up instead, putting the ball straight through the wall and past Keylor Navas in the PSG goal.

De Bruyne and Mahrez were involved in a lengthy chat before the free-kick was struck, seemingly debating who would take it.

And speaking after the game, City’s no. 17 revealed what was said. 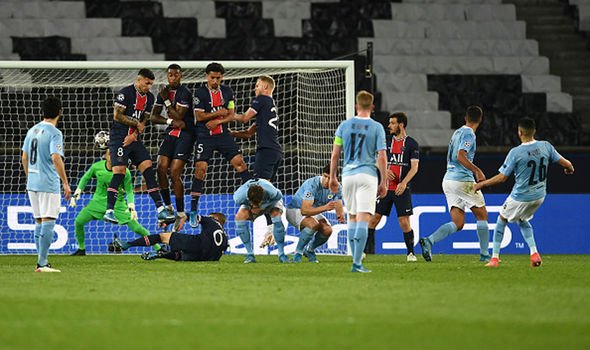 “He asked me if he could take it and I said ‘if you believe in yourself take it’,” De Bruyne told BT Sport.

“He scored the goal so who am I to say something about that?”

Reflecting on the game as a whole, De Bruyne admitted that City took time to grow into the occasion, before the tactical tweaks at half-time did the trick.

“I think a game of two halves,” he added. “We started well in the first 10 minutes, had some control.

“But you know they’re an unbelievable team. They’ve got great quality up front.

“I think it’s a shame the way we conceded. I think after that they had a couple of small chances.

“After 25 minutes we changed the way we pressed them and it became better. We had a couple of opportunities, especially the one with Phil.

“The second half was much better. We put them under pressure. Obviously the way the first goal goes in is a bit lucky but I think we played great football in the second half.”