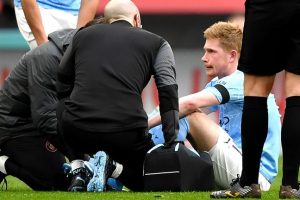 The midfielder was substituted after 47 minutes during the tie at Wembley on Saturday after landing awkwardly on his ankle following his battle for the ball with N’Golo Kante as he attempted to keep it in play.

De Bruyne was treated by City’s medical staff and then replaced by Phil Foden as he limped off the pitch.

Chelsea’s Mason Mount and Thiago Silva were also substituted after picking up injuries during the game.

De Bruyne could now be a doubt for the Carabao Cup final on April 25, along with Tottenham striker Harry Kane.

The Belgium international missed five matches because of a hamstring issue in January and February and has now suffered another injury problem which could impact his availability for City’s remaining six Premier League games, and their challenge for two cup competitions.

He recently played both legs of City’s Champions League quarter-final win over Borussia Dortmund. Guardiola’s side play their semi-final ties against Paris Saint-Germain on April 28 and May 4. 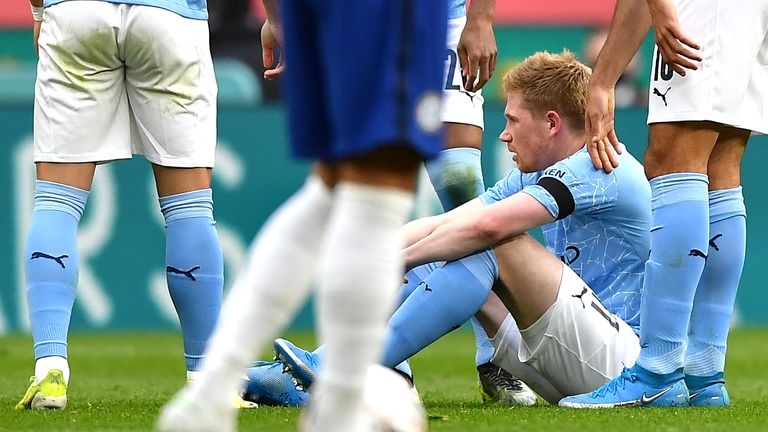 The 29-year-old’s form has been instrumental in Pep Guardiola’s side’s charge towards the Premier League title this term, with the playmaker scoring five goals and contributing 11 assists in 24 top-flight games.

The 2020 PFA Player of the Year and last term’s Premier League Player of the Season has won seven major trophies with City, and that number could increase before the end of the campaign with a treble still a possibility.

Earlier this month, De Bruyne signed a new two-year contract at the Etihad Stadium which will keep him at the club until 2025.

Guardiola’s side were knocked out of the FA Cup at the semi-final stage on Saturday with Chelsea progressing to their fourth final in the last five seasons, as Hakim Ziyech’s second-half goal sealed a 1-0 win for the Blues.