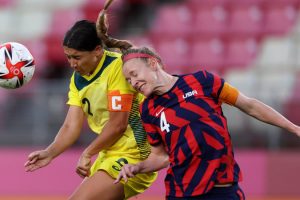 Sam Kerr became the Matildas’ record goalscorer when she struck her 48th goal for the national team, one more than Lisa De Vanna, in a crazy third-place game in which the USA claimed bronze after a thrilling 4-3 victory.

Tony Gustavsson’s team gave everything and will feel that, against what had hitherto been a disappointing American outfit, this was a missed opportunity to gain Australia’s first soccer medal. 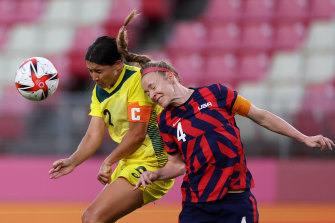 Sam Kerr and Becky Sauerbrunn compete for the ball.Credit:Getty Images

It was a game played in frenetic fashion, and it was the teams’ sixth game in just over a fortnight, so exhaustion might have been expected.

What was not expected was the way that the USA took the lead through superstar Megan Rapinoe, who scored direct from a corner kick after eight minutes.

Did she mean it? She certainly put plenty of curve and swerve on the ball, but so rare are such strikes that there always remains an element of fluke about it.

Teagan Micah, who had already made a huge save to deny Christen Press’ shot to concede the corner, was unable to get anywhere near the dipping ball in a crowded penalty area. 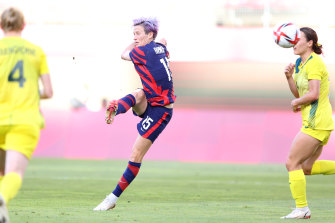 But it didn’t take long for the Matildas to shake off that disappointment and get back on level terms and of course it was the talisman Sam Kerr who was able to find an equaliser in the 17th minute.

Caitlin Foord won the ball in midfield and slid a pass through to the Chelsea striker who shot low and hard at America’s back-up goalkeeper Adrianna Franch: the shot-stopper got a hand to the ball but could not parry it to safety.

However the USA, who have looked toothless in some of their earlier games (failing to score against Sweden and Australia in the group games and in the loss to Canada in the semi-final) had their shooting boots on in this clash.

It was Rapinoe, the 36-year-old veteran, who restored the USA’s lead just four minutes later with a tremendous volley but it is not a goal that experienced defender Alanna Kennedy will want to watch again in a hurry. 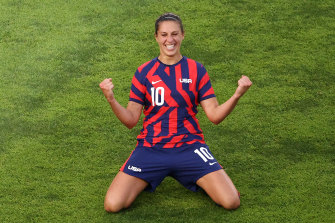 The big central defender got her timing horribly wrong and sliced a clearance straight to Rapinoe, who lashed past Micah.

Australia’s goalkeeper had been the busier and had already made some fine saves, denying Press a second time before the US had even notched their first goal and then keeping out a Lloyd effort.

But Micah could do little in first-half stoppage time to prevent the Americans stretching the advantage and it was the 39-year-old Lloyd who would not be denied this time.

The veteran controlled a pass from Lindsey Horan, shifted the ball deftly and then drove diagonally past Micah to make it 3-1.

It looked all over for the Matildas six minutes after the restart when Lloyd grabbed her second, pouncing on a weak header from Kennedy, who was trying to find Micah, before finishing down the middle past the goalkeeper.

At 4-1 the contest looked done and dusted, but the Matildas have plenty of spirit and when Foord headed home Kyah Simon’s cross in the 54th minute the Australians got a sniff.

Had Kerr’s header from a Hayley Raso cross gone in rather than hit the post just two minutes later it would have been game on.

Coach Tony Gustavsson gave youth its chance in the last 25 minutes, introducing Kyra Cooney-Cross, Courtney Nevin and Mary Fowler, and when Emily Gielnik drove home from distance in the last minute there was a glimmer of hope that a miracle might be possible.

They came back from the dead against Team GB, but the Matildas couldn’t quite manage it a second time.