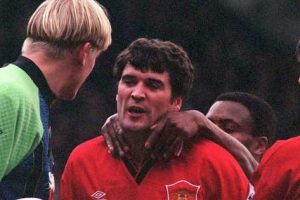 Roy Keane once headbutted Peter Schmeichel on a Manchester United pre-season tour of Asia in 1998.

The pair's feud reemerged last week after Keane branded Schmeichel as 'overrated' when chatting to his former teammate Gary Neville on The Overlap.

However, when Schmeichel was given the chance to respond to the claims by Richard Keys on BEIN Sports, he replied: "I actually don't."

Keane and Schmeichel were both a part of Sir Alex Ferguson's famous treble-winning side during the 98/99 campaign.

And it was before that famous season that the pair's feud started with an altercation during the Red Devils' pre-season tour of Asia.

"I had a bust-up with Peter when we were on a pre-season tour of Asia, in 1998, just after I came back from my cruciate injury. I think we were in Hong Kong," Keane wrote in his autobiography.

"There was drink involved. There'd been a little bit of tension between us over the years, for football reasons.

"Peter would come out shouting at players, and I felt sometimes he was playing up to the crowd: 'Look at me!'

What do you think of Keane's comments? Let us know in the comments section

He continued: "Nicky Butt had been filling me in on what had happened the night before. Butty had refereed the fight.

"Anyway, Peter had grabbed me, I'd head-butted him – we'd been fighting for ages. At the press conference, Peter took his sunglasses off. He had a black eye."

Despite the keeper's black eye, Keane wasn't sure who had won the altercation.

And it's safe to say that there wasn't any love lost between the pair.

Ahead of Denmark and the Republic of Ireland's World Cup qualifier in 2017, Keane was asked if he would speak to Schmeichel ahead of the clash.