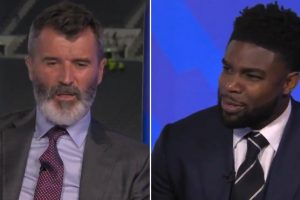 Roy Keane and Micah Richards had a fiery debate over Tottenham Hotspur’s defending in the North Londoners’ 3-0 defeat to Chelsea.

Nuno Espirito Santo’s side were arguably the better team in the first-half, but Thomas Tuchel’s side took the game away from the Lilywhite’s after the interval; courtesy of goals from Thiago Silva, N’Golo Kante, and Antonio Rudiger.

It was Spurs’ second 3-0 defeat in two Premier League matches, after they were defeated by the same scoreline at Crystal Palace in the previous game-week.

While Tuchel has been highly praised for his second-half changes, Keane believed Spurs were the masters of their own downfall, particularly on the way in which Silva headed Chelsea ahead.

"A lot of the time it’s about who wants to head the ball?” said Keane.

“We’ve seen his defending, he had a tough start if you remember last season, for one or two games he was shaky.

“But he’s had a year in the game, he’s used to the pace, he’s surrounded by brilliant players.

“When the ball goes into these areas, some people want to defend and head the ball, Spurs don’t have that. People not doing the basics, stopping runners, being strong.”

Where will Chelsea and Tottenham Hotspur finish next season? Comment below

However, Richards disagreed with the former Manchester United captain, believing Chelsea’s opening goal was more down to Silva’s intelligent movement, rather than Spurs’ poor defending.

"It’s very intelligent the way he hangs out at the edge of the box,” said Richards.

"He comes in, it’s where he makes the run from. By the time he [Ali] engages the ball is in the back of the net."

“He was always going to get the advantage, take nothing from the header. Not just the goal, his performance was outstanding, the way he was leading it.”

Keane, however, disagreed with the former Aston Villa and Manchester City defender, and immediately reaffirmed his blame to the Spurs defenders.

"It’s not confusing Micah. It’s somebody going to attack the ball and head the ball,” Keane said sternly.

“Good delivery, he put it in the right area of course but who really wants to head the football and that’s it."