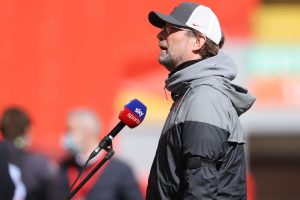 Jurgen Klopp’s opinion of a potential European Super League has resurfaced after plans for a new breakaway competition were finally confirmed.

12 leading clubs, including Liverpool, Manchester United and Arsenal, are at the forefront of efforts to launch a new European tournament to rival the Champions League.

The dozen ‘founder clubs’ signalled their intention on Sunday night with a formal announcement with three further major clubs expected to join imminently.

The move has received almost universal condemnation from supporters, fan groups as well politicians and leading football figures such as Gary Neville and Jamie Carragher.

No one from the clubs involved have yet broken their silence on the proposals but Liverpool manager Klopp’s thoughts on the matter, from way back in 2019, were soon recalled on social media.

“I hope this Super League will never happen,” he said. “With the way the Champions League is now running, football has a great product, even with the Europa League.

“For me, the Champions League is the Super League, in which you do not always end up playing against the same teams.”

After the plans emerged on Sunday afternoon condemnation was almost instant throughout the game, before the clubs released statements just before midnight.

In announcing the news, Manchester United owner Joel Glazer, also vice-chairman of the Super League, said: “By bringing together the world’s greatest clubs and players to play each other throughout the season, the Super League will open a new chapter for European football, ensuring world-class competition and facilities, and increased financial support for the wider football pyramid.”

A joint statement from the clubs read: “Twelve of Europe’s leading football clubs have today come together to announce they have agreed to establish a new midweek competition, the Super League, governed by its founding clubs.

“It is anticipated that a further three clubs will join ahead of the inaugural season, which is intended to commence as soon as practicable.”