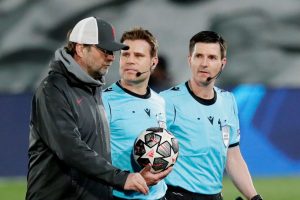 Jurgen Klopp tore into officials after watching his Liverpool side suffer a 3-1 defeat against Real Madrid in the Champions League on Tuesday night.

The Reds boss, who was left with a lot of big decisions to make ahead of the second leg, accused referee Felix Brych of having a personal vendetta against Sadio Mane.

The Liverpool forward had a disappointing night in Madrid and was taken to the ground on numerous occasions.

At one point Mane was seen going to ground after sprinting past Lucas Vazquez, but Brych waved for him to get back on his feet.

And after the game, Klopp was seen shouting at the referee over his officiating of the match.

Speaking in his post-match press conference, the Liverpool boss said: "The situation with Sadio today, the ref I don't know. Was it something personal?"

"Whenever Sadio went down he didn't get anything to be honest.

"I thought he was unfair with Sadio, that's what I told him.

"He didn't lose us the game but you need just an OK ref."

Liverpool now face the prospect of having to win 2-0 in the return leg at Anfield next week.

They've got history of turning around first-leg defeats against Spanish sides, however, having beaten Barcelona 4-0 on an iconic night in 2019.

But Klopp isn't expecting any miracles, as he admitted it will be a tough game without fans in attendance at Anfield.

"Of course, it is completely different," he said. “If you want to have some emotional memories, you watch the Barcelona game back and 80% of this game was the atmosphere in the stadium, I would say. We have to do without that.

“It’s not that I sit here and think comebacks are our thing and that we do that all the time. We have from time to time, but we always had supporters in the stadium. We don’t have that this time. I don’t know if we can do it, but I can promise we will give it a proper try.”