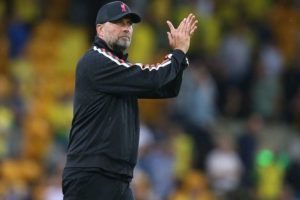 Liverpool manager Jurgen Klopp has revealed he knows how his club will react to Chelsea and Manchester United’s transfer windows. Bith clubs have splashed the cash in the market but the Reds have had a relatively quiet this summer.

Liverpool boss Klopp has detailed how his club will react to Chelsea and United after their big signings in the transfer window.

It comes after some huge arrivals at both teams including Romelu Lukaku, Jadon Sancho and Raphael Varane.

As a result, many are tipping the two Premier League titans to grapple with Manchester City for the title, who have also splashed out £100m on Jack Grealish.

The Reds, on the other hand, have been more prudent with their spending with Ibrahima Konate their only significant arrival.

They brought in the Frenchman for around £35m early in the summer but it has been quiet since then.

And fans are starting to worry as their Prem rivals strengthen ahead of a grueling season.

But Klopp has insisted that their frugality should not be mistaken for a lack of ambition with Liverpool ready to utilise their brilliant academy.

“We have to keep the spaces open for these exceptional talents and that’s what we try,” he said.

“It’s not always possible and that doesn’t mean it will happen next week, next month or next year.

“It’s just we need to show that we are a club who gives opportunity to these kind of talents. That’s what we want to show.”

The top talent that is set to play more of a role is Harvey Elliott, who has wowed coaches in training, with Klopp a big fan.

“That’s the plan – that is why it was a really good pre-season for Harvey. Let’s see how we can use that,” he added.

“He showed up in an exceptional way, and he’s only 18 so it might be really exceptional.

“We don’t treat him like an 18-year-old boy, at least not in training sessions and on the pitch as his football is pretty mature in a lot of moments.

“That’s really exciting. We are happy about that. Like all our midfielders he brings something different and a different dimension into the game.