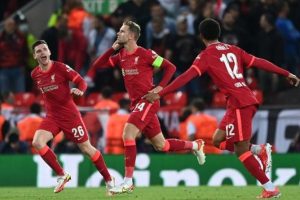 There is no doubt that Jurgen Klopp has put together one of the best sides in Europe, with a brilliant front three of Mohamed Salah, Sadio Mane and Roberto Firmino, but the German could be just one signing away from making Liverpool unstoppable.

Liverpool completely dominated AC Milan in terms of possession and chances on Wednesday night, but although Jurgen Klopp’s side looked comfortable for the majority of the first half, their failure to covert chances allowed AC Milan back into the game before Jordan Henderson’s brilliant strike won the tie for the Reds.

Klopp’s side were rampant from the first whistle, and Trent Alexander-Arnold opened the scoring after neat link-up play with Mohamed Salah down the right-hand side, although his effort was later credited as a Fikayo Tomori own goal.

It looked like it was going to be a case of how many for Liverpool, but Salah missed a penalty shortly after, and the Reds failed to add to their one goal lead, which cost them as Milan stayed in the game and stunned the Anfield crowd right before half-time – scoring two quick-fire goals.

Liverpool came out of the traps flying again and Salah made amends for his earlier miss and fired his side level within four minutes of the restart.

Then, with an hour remaining to play, Henderson was left unmarked on the edge of the penalty area and lashed a half-volley into the bottom corner after a corner went over the heads of everyone at the front post.

Liverpool looked like the real deal until they allowed Milan to silence the home crowd, but if Klopp had a true goalscorer on the pitch then his side would be unstoppable, and this wouldn’t have been a problem.

Salah has been influential since signing from AS Roma in 2017, and has been the clubs top scorer in each of his four seasons since returning to the Premier League, with Roberto Firmino and Diogo Jota performing well in Liverpool’s central role.

However, neither of them are natural no.9’s and it’s the one position that Liverpool are truly lacking when it comes to assessing the club’s squad depth.

Klopp has one of the best goalkeepers in the world, two irreplaceable full-backs and a whole host of options for central roles both defensively and in midfield, but they don’t have a big centre-forward.

This hasn’t been too much of an issue in recent years, and in the 2019-20 season they’d never have let their concentration go like they did against Milan on Wednesday, but it’s a trend that we started to notice during the last campaign.

It’s an area that Klopp must address, even more so as Liverpool’s front three are ageing and cannot continue to perform to the standards they have set over the last few seasons, and former Liverpool striker Michael Owen gave his views on Klopp’s ageing attack:

“I think Liverpool are going to address it. Look at the front three, Firmino, Salah and Mane, all late 20’s. Another three or four years you’re not going too replace one, it all of a sudden goes bump and you’ve got to replace two of them. That’s something that Jurgen Klopp has to address next year.”

With the pressure that Liverpool impose, and the energy that their side create, if a big centre-forward could be thrown into the mix to convert more of their chances, they would be almost unplayable.

Manchester City are experiencing a similar issue under Pep Guardiola, as the Spaniard can’t seem to secure a natural no.9.

But the way that the Citizens play makes it less of a problem, with floods of midfield options in and around the box.

Both Chelsea and Manchester United sorted their issues this summer, as Romelu Lukaku and Cristiano Ronaldo returned to the Premier League, and if Liverpool were to follow their title rivals then it could pay off handsomely.

Liverpool only signed one player during the recent summer window, as Ibrahima Konate arrived from RB Leipzig in a deal worth £36m, meaning that they could be preparing for a big move following the conclusion of the current campaign.