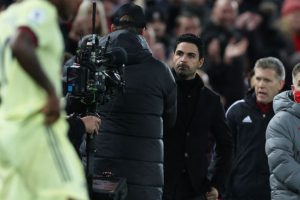 Jurgen Klopp has spoken about his fierce touchline argument with Mikel Arteta during Liverpool’s 4-0 thumping of Arsenal.

The two managers went wild at each other when Klopp took exception to the Arsenal bench commanding the referee to hand out a card for Sadio Mane when he was penalised for a foul on Takehiro Tomiyasu.

In response, Arteta erupted and charged down the touchline to confront the Liverpool boss.

Both squared up to each other and had to be held back by their coaching staff before they were both booked for the incident.

However, Liverpool fans have been ironically thanking the former Everton midfielder for the furore as that incident saw the tempo rise at Anfield, with the Reds taking control of the game and putting the Gunners under severe pressure. On argument with the Gunners coach, Klopp said via BBC Sport: "It wasn't the plan – the situation was that Sadio [Mane] goes for a clean heading challenge, no one makes a foul and they get up and for me it's a bit too obvious that there was nothing. He's just a physical player – you can't do that it happens too often and it's not right.

"When they rise up from the bench it's difficult to not get up and say something.”

Arteta also spoke on both managers receiving a yellow card: "He was defending his team, I was defending my team, that's it. It doesn't matter. Yes I did [speak to Jurgen Klopp after the match] and I congratulated him. These moments are left on the pitch.”

Will Jurgen Klopp guide Liverpool to the title? Let us know your thoughts in the comments section below. Arsenal goalkeeper Aaron Ramsdale continued his impressive form of late, despite letting in four. The former Sheffield United player’s selection from most as the away side’s best player speaks hugely of how Liverpool dominated the game.