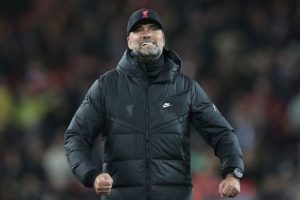 Normal service resumed at Anfield for Jurgen Klopp and his Liverpool juggernaut. Mikel Arteta’s Arsenal arrived onto Merseyside with their tails up and a Premier League unbeaten streak stretching all the way back to August.

Meanwhile the Reds were wounded and depleted hosts, having come into the contest with vented rage from their 3-2 away loss to West Ham and an injury list containing four first team midfielders. Fortunately, the Red winning machine was jump started back into life, and Liverpool, as usual, proceeded to overwhelm and sweep the Gunners aside at Anfield.

However, chinks in Liverpool’s armour will constantly be exposed with every new entrant into their ever-growing injury list.

And it is an issue former Manchester United defender Gary Neville fears could come back to haunt them as the season progresses.

“I think it’s most difficult for Liverpool because they are so finely tuned. I think the other two have bigger squads and better squads,” Neville said on Sky Sports.

“Liverpool, as I said earlier in the season, the best XI, that doesn’t change, but if two or three go missing, then it does cause a real problem.”

Ibrahima Konate’s £36m arrival from RB Leipzig was the only new signing Liverpool made all summer. All four of the Reds’ attacking players found the net against the North Londoners in what was a fine demonstration of how to finish and how to conjure challenges.

Mohamed Salah, Diogo Jota, Sadio Mane, and Takumi Minamino all got themselves on the scoresheet in what was a fine display in front of goal. Unfortunately, 20 of the Reds’ 35 goals will be jetting off to Cameroon in January for the Africa Cup of Nations (AFCON) as Salah, Mane, and Naby Keita will be representing Egypt, Senegal, and Guinea.

Very few teams in the footballing World can suffice without their two main goal scorers and match winners, yet two of the team who could do so efficiently are above the Reds in the table. Chelsea lost £98m arrival Romelu Lukaku to injury but have since scored fourteen goals in their last four matches, while Manchester City’s embarrassment of riches is so vast, it is hard to pinpoint who exactly are their most important players.

They were without British record transfer signing Jack Grealish and the mercurial Kevin De Bruyne, yet still looked like they were going to breach Everton every time they entered their half.

Klopp’s heavy metal football, as the German so romantically refers to it, is one of the most physically demanding and testing styles of football in the modern game. You have to run yourself into the grand, press teams the entire length of the pitch, and fly into huge challenges to win the ball high up the pitch.

Numbers and personnel are just as important as quality, and Klopp’s options are decreasing by the week. Their quality, particularly in the frontline, is arguably unmatched to anybody else in European football on current form.

Yet, as they experienced the hard way last year, disaster is only a key injury or two away. Klopp passionately emphasised his detest towards international breaks, but he will have to navigate through the AFCON without his two best players.

The former Borussia Dortmund manager will wish Keita, Mane, Salah, good luck, but through a gritted smile he will be praying for early, injury free exits for the three.

Liverpool, City and Chelsea have all been ominously good this season, yet Thomas Tuchel and Pep Guardiola’s embarrassment of riches means they have the upper hand on Klopp.

And January will be the Reds’ last chance to level the playing field and add to their squad. Research carried out by football finance expert Kieran Maguire states the Reds could potentially spent up to £273m without attracting the unwanted interest from Financial Fair Play.

Yet tight the Liverpool transfer purse strings continue to be. Considering the spectacular collapse of their title race last season amid an equally spectacular injury crisis, Klopp will cringe and grimace during every firm tackle.

“What Liverpool will want is to be within a point or two, with four, five or six games to go,” Neville added. “With that history and that tradition and Jurgen Klopp’s energy, I think then they will become really dangerous. But I think to get there will be a bigger struggle for them than it would be for Chelsea and City.”

January will be Liverpool’s last chance to level playing field and further bolster his squad. Their decisiveness, or lack off, in January could prove to be critical.