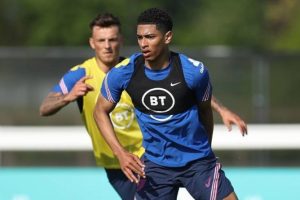 Jude Bellingham has shown enough promise to suggest he could be England’s breakthrough star at the European Championships. That is the opinion of Ian Wright, who believes the Borussia Dortmund midfielder is set to make an impact for Gareth Southgate’s side this summer.

The 17-year-old has beaten off competition from the likes of Jesse Lingard and James Ward-Prowse to earn a place in Southgate’s final 26-man squad for the tournament.

He makes his first start for England in their friendly against Austria at Middlesbrough’s Riverside Stadium tonight, partnering Declan Rice in midfield.

Bellingham only made his debut in November – and has played just twice for the Three Lions before Wednesday evening – but has made a real impression on Southgate.

He appears to be behind Rice, Jordan Henderson and Kalvin Phillips in the pecking order ahead of England’s opening Euro 2020 game against Croatia on June 13.

JUST IN: Raphael Varane has Man Utd ‘offer’ on the table as part of summer plan 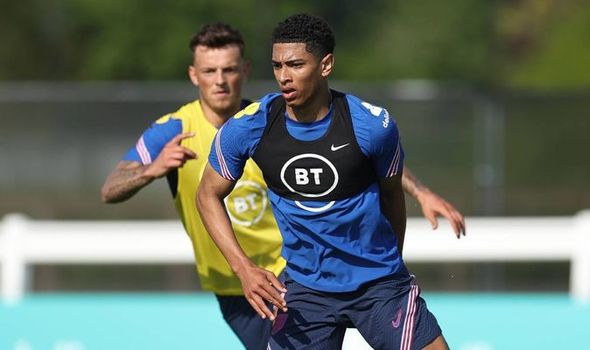 However, former Arsenal striker Wright believes that if Bellingham performs in the warm-ups against Austria and Romania this week then he could jump the queue.

“When you look at the midfielders we have got with Declan Rice and Kalvin Phillips, with the seasons they have had, and then you throw in Jude Bellingham,” he said on ITV’s coverage.

“What Birmingham City fans were saying for so long, people were laughing at him, they retired the shirt. We’re now seeing what Jude Bellingham is.

“Similarly to Dortmund with Thomas Delaney in their midfield, I feel he could partner Jordan Henderson. I think he could be our breakout player.”

Chelsea owner Roman Abramovich may have to make transfer sacrifice

Liverpool midfielder Henderson remains an injury doubt, having failed to recover to full fitness following a groin injury in February.

With Southgate choosing not to select Lingard and Ward-Prowse when he reduced his squad from 33 names to 26, Bellingham could play an important role at Euro 2020.

If Henderson is not fit to start against Croatia next Sunday then the youngster could be thrust into the spotlight.

Meanwhile, despite not making the squad, Lingard starts against Austria, with England missing the Chelsea and Manchester City players who played in the Champions League final on the weekend.