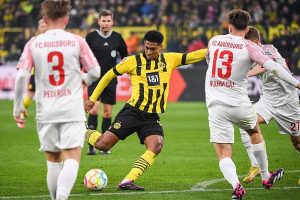 That’s why everybody wants him! Jude Bellingham nets a stunning goal for Borussia Dortmund just half-an-hour into his first game since England’s World Cup exit against France six weeks ago

Liverpool target Jude Bellingham scored a stunning goal from outside the box during his first game back for Borussia Dortmund against Augsburg, since England’s World Cup exit to France six weeks ago.

The 19-year-old certainly wasted no time on his return to the pitch, opening the scoring in wondrous fashion, to net his fourth goal in 15 appearances for the Bundesliga side.

Dancing around the edge of the penalty area, Bellingham evades two Augsburg defenders, to fire a thumping low strike into the bottom right corner. 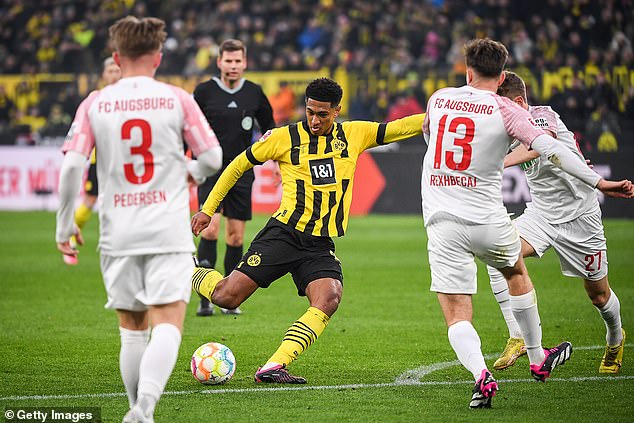 And what a strike it was, with the box-to-box midfielder proving he can not only create goals, but score them too, claiming his 19th goal for the club, just 30 minutes into his return to the pitch.

It comes as England’s World Cup hero is set to announce he will reject a £180-a-week contract offer from Dortmund later this week.

Bellingham was one of England’s standout performers during the competition, helping Gareth Southgate’s side reach the quarter-finals of the competition, while also scoring his first goal for the men’s senior side against Iran.

His performances have attracted much interest from clubs around Europe, but SportsMail reports suggest that he will sit down with the Bundesliga club later this week to talk more on his contract, which will expire this summer.

But considering the goal he has scored, they will no doubt be working as hard as possible to keep the young prospect. 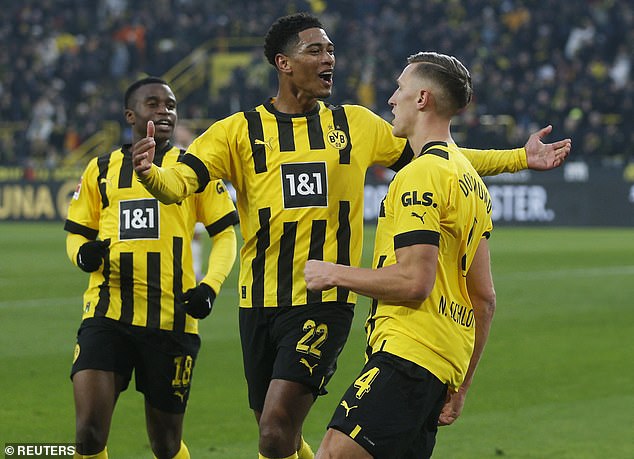 Several top clubs are in the market to acquire the young midfielder with Liverpool and Real Madrid both hopeful they can sign Bellingham.

Earlier this week, Dortmund boss Edin Terzic had reportedly told Bellingham to reject any offers from both clubs in a bid to get him to stay in Germany.

However, it appears Liverpool are still keen to sign the midfielder with Steven Gerrard suggesting yesterday he would work with the Merseyside club to help lure Bellingham to Anfield.