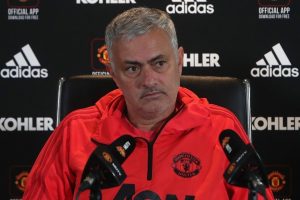 In a season which has seen Manchester United endure all manner of embarrassing defeats, Saturday’s 4-0 battering by Brighton may just have been the biggest humiliation yet. The Red Devils were dismantled by the Seagulls on the south coast to add further weight to accusations United’s current crop don’t have the attitude – or aptitude – to represent the club – an issue which appears to be a long-running and deep-rooted concern.

Ralf Rangnick branded his side’s showing at the Amex as “terrible” as United’s players were widely accused of lacking fight, spirit and any ounce of desire. But it isn’t the first time in recent years that the club’s players have been accused of not caring.

Back in October of 2018, Jose Mourinho stuck the boot into his own players as a 3-1 Premier League defeat to West Ham left his Red Devils languishing down in 10th. At the time, Mourinho remarked that “some [players] care more than others” at the club as his revealing admission highlighted the depth of United’s demise.

“Every player is different, no player is the same,” Mourinho said. “I see different actions but what you see is not really inside. I see upset people, some people that don’t look like they lost a game.

JUST IN: Five things we learned as Man Utd battered by Brighton

“I see so-so but in the little two sessions of training we had [since Saturday] everything was normal, desire to work and play. What I can do to improve things I do, and I will improve the things that depend on me and my work.”

Though the Portuguese manager’s comments were made with regards to some of his squad over three-and-a-half years ago, one could be forgiven for thinking the current Roma boss made the remarks in the wake of United’s latest embracing ordeal. Saturday’s shocking showing proved little has changed at the club in the years since.

While Cristiano Ronaldo shouldn’t be singled out for criticism in a dismal team display, the Portuguese superstar’s decision to laugh off the third goal United conceded will have done little to prove United’s current crop care more than Mourinho’s much-maligned men. Bruno Fernandes became the latest United player to label one of his side’s performances as “embarrassing” while confessing those involved in the Brighton mauling are not fit to wear the shirt.

There have been countless excuses from United’s players on where it has all gone wrong this season, but perhaps the biggest issue can be found in Mourinho’s comments back in 2018. Some of this United team don’t appear to care and until that mentality can finally be ousted from the club for good, the Red Devils can expect further humiliations to come their way.