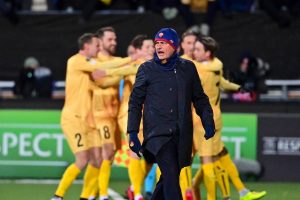 A Jose Mourinho side conceded six goals for the first time as Roma were thrashed by Norway's Bodo/Glimt – but the Special One has plenty of other humiliating defeats on his record.

The 6-1 capitulation in the Europa League brought about an unwanted record for Mourinho, though it's one he's done well to avoid up until now.

His time in the dugout started over 20 years ago and he's racked up more than 1,000 games during his managerial career.

However, all managers suffer heavy defeats along the way. Daily Star Sport are taking a look at those games Mourinho would really rather forget.

Manchester United had progressed to the knockout stages of the Champions League where they faced Sevilla, who they drew 0-0 with in the away leg.

All the Red Devils therefore had to do was win at Old Trafford. And they didn't.

In fact, the Spanish opponents even beat Mourinho's side, which led him to conduct a 12 minute rant following the match to defend himself from the fierce criticism.

Is Mourinho one of the greatest managers of all time? Let us know in the comments section.

Harry Kane is one of the world's best strikers nowadays but back in 2015 he was still finding his feet in the Premier League.

He sent Chelsea and his future boss Mourinho packing when they rolled into White Hart Lane on New Years Day with his brace and three more Spurs goals earning them a destructive London derby win.

And it wasn't the only humiliating defeat that month…

It looked to be a routine fourth round match for the Blues as they took a 2-0 lead through Gary Cahill and Ramires.

But then the League One side struck back to level the game before two late goals secured a remarkable victory and left Mourinho with egg on his face. Tottenham were hoping Mourinho would work his magic to bring them an elusive trophy and the Europa League looked to be a good chance of that.

They took a 2-0 lead into the second leg of their round of 16 tie with Dinamo Zagreb but their boss took no chances and put out a full strength side.

However, Dinamo Zagreb's Mislav Orsic put in a stunning performance, scoring twice to force extra-time before adding a third to knock Spurs out and send Mourinho on the path to his eventual sacking.

Mourinho's first spell at Chelsea is looked upon as probably the greatest of his career, but even that wasn't immune to an embarrassment.

He's only lost two games in the English top flight when he took his side north to face Middlesbrough in the 2005/05 season.

That changed when Fabio Rochemback, Stewart Downing and Yakubu netted to stun the Special One.

The 58-year-old had won everything there was to win with Real Madrid when he took his side to Germany to face Borussia Dortmund.

It was the first leg of the Champions League semi-final and the trophy he'd not yet picked up in Spain was within sight.

That was, until Robert Lewandowski scored four goals to put Dortmund in the driving seat and virtually book their place in the final with Bayern Munich.

Seeing Mourinho in the opposing dugout at Stamford Bridge again was a strange sight when he took United there for the first time in the 2016/17 season.

He barely had time to settle into his seat when Pedro netted in the opening minute. It didn't get any better from there.

As humiliating goes, it doesn't get much worse than returning to your old club and being on the receiving end of a hammering. Ouch.

El Clasico was arguably at its peak when Pep Guardiola and Mourinho were in charge of the respective Spanish giants.

The Portuguese's first was a baptism of fire, though, as Barcelona tore apart his Real Madrid side.

A shellshocked Mourinho declared after full-time: "This is the first time I have ever been beaten 5-0." At least that record is still in tact, eh Jose?