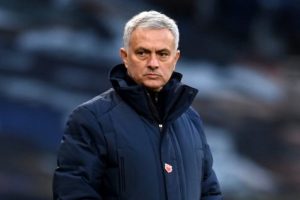 Spurs’ trip to Aston Villa next Wednesday is under serious threat after nine first-team players tested positive for coronavirus this week at the midlands club.

Another cancellation would follow last week’s postponement against Fulham after the west London club suffered a similar fate, while the reverse fixture with the Cottagers in April will also be moved after Spurs reached the Carabao Cup final.

Mourinho’s side are already facing a crippling fixture list in the second half of the campaign as they challenge on four fronts and the Portuguese has said he is not prepared to repeat the early season schedule where Spurs played seven matches in 22 days.

“I believe that it’s a completely impossible situation for a club to have three matches postponed, especially if that club plays in Europe,” he said ahead of Sunday’s FA Cup trip to eighth-tier Marine.

“If it is a club that doesn’t play in Europe, there are always the Uefa fixtures, which are six to eight fixtures for Champions League teams and in the Europa League case even more.

“So for a Europa League team to have three matches postponed is impossible. Completely impossible. That’s the only thing I can say.

“The only thing we can say is what we did in the beginning of the season is impossible to repeat and we refuse to repeat. We have to defend our players, the integrity of our competition and we would never accept to play seven games in three weeks like we did before.

“Because of the moment of the season. One thing is beginning and another thing is mid-season. Also because of the difficulty and demands of the matches.

“We cannot be put in an impossible situation. So I repeat: to have three matches postponed is impossible.

“It’s not for us to find decisions, I think it’s the moment for the Premier League to show leadership and make decisions.

“Decisions, where of course, for a club like us that is trying everything, every day to be ready to play, to follow the rules that we had in our hands since the beginning of the competition.

“We cannot be punished. If we don’t play against Aston Villa, we’ll have three matches postponed and that’s impossible because after the season we’ll have the Euros and the Euros will not be moved.”

Mourinho stopped short of saying the game should go ahead with Villa playing Under-23 players, but said clubs have been preparing for games to go ahead with just 14 fit players all season.

“The only thing that I can say, and I answer for ourselves, is that since pre-season we knew that eventually it would happen to us to have difficult situations to manage and to play a game with 14 players,” he said. “I think every club was mentally ready for it.

“Because eventually in a very difficult situation Chelsea could lose one two or three goalkeepers, Kepa, Mendy and Caballero. And Petr wanted to be available.

“So I think every club was mentally ready for an extremely difficult situation of having lots of players not available to play. In our case we did not have that extreme situation yet, but we have had problems.”

Mourinho confirmed that all of his squad and staff have tested negative for coronavirus in the latest round of testing.

Spurs played against Brentford earlier in the week and Bees manager Thomas Frank has since tested positive for the virus.

“The protocols are important, but in the test before the match Thomas was negative,” Mourinho said. “And everybody in his club and our club involved in the game, everybody was negative.

“So that little contact could be avoided, maybe yes. But we all felt it was safe because everybody was negative.

“After that Thomas tested positive, all of us negative. We got told a negative test between players and coaching staff, everybody negative.

“So we just wish him the best recovery and to be back soon with his team. At the same time we wish good luck to his coaching staff that has to be in charge.”