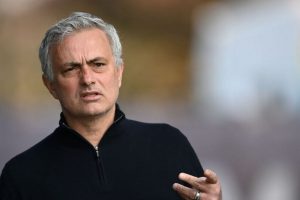 AS Roma manager Jose Mourinho has delivered a savage response to James Corden – after the British comedian asked the 'Special One' about his future.

Mourinho – who was sacked by Tottenham just days before their Carabao Cup final clash with Manchester City – recently took the reins at Roma.

And, ahead of the Euros Corden, for The Sun, quizzed the Premier League winning manager about a variety of topics including the upcoming tournament, penalties, and even Harry Kane.

But it was Mourinho's response – in typical Special One fashion – to a question about his future that has stolen the headline.

"And finally, be honest, everything you have achieved in your career, 25-and-a-half cups, do you feel with every move you are getting closer to your dream of becoming the manager of West Ham United?" Corden asked Mourinho over a zoom call.

"It is not my dream," Mourinho quipped back without blinking.

"If it’s not a dream because it’s just so far out of reach for you I get it, I totally get it," Corden, equally as quick, snapped back.

Corden is an outspoken Hammers fan, and he happily discusses all things West Ham with unsuspecting guests.

Will Mourinho succeed at Roma? Let us know in the comments section

Mourinho is gearing up for his latest challenge with Roma, and it's the first time he has managed in Italy in over a decade.

And he has lofty expectations, he left Italy on a high after securing a famous treble with Inter Milan back in 2010.