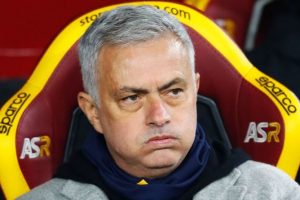 Former Tottenham boss Jose Mourinho was up to his old tricks on Sunday evening as he questioned the mental strength of his Roma side following their narrow defeat at the hands of Juventus. The Portuguese manager saw his team squander a two-goal lead during the closing stages of the match to come away empty-handed, with the visitors mounting a late resurgence to steal all three points at the final whistle.

Tammy Abraham’s early goal was quickly cancelled out by Paulo Dybala’s first-half strike to ensure that neither side went into the break with the all-important advantage.

Roma looked set to take at least a point from the match when Henrikh Mkhitaryan added a second during the early stages of the second half but were unable to prevent Juventus from forcing their way back into the contest.

Three goals in seven minutes from Manuel Locatelli, Dejan Kulusevski and Mattia de Sciglio fired the Old Lady in front before they held on to secure a valuable win on away turf.

Roma will have been left particularly unhappy with their failure to snatch a late equaliser given their numerical advantage over Juventus, who were reduced to ten men when Matthijs de Ligt was shown a red card with nine minutes remaining.

Mourinho was furious with his side’s performance after the final whistle and displayed shades of his spell in charge of Tottenham by criticising the collective attitude of his players.

JUST IN: Man Utd’s bid to offload Martial during Cavani talks with Barcelona

“It was so good for 70 minutes, then there was this psychological collapse,” the 58-year-old told DAZN.

“The 3-2 killed us, because Felix [Afena-Gyan] had an extraordinary game, which finished with a sprint against [Juan] Cuadrado. I take him off and his replacement [Eldor Shomurodov] gets it all wrong.

“When we allowed them back in for 3-2, a team with a strong mentality like Juventus, a strong character. The fear set in, a psychological complex.

“It’s not a problem for me having 3-2. It’s a problem for them, for my team. At the end of the day, when you’re in the s***, you get back on your feet and find your character.

“But there are people in this locker room who are a bit too nice, a bit too weak.

“I already told the players, if the game had ended at the 70th minute, it would’ve been an extraordinary performance. Unfortunately, it didn’t end then.”

Mourinho is no stranger to a post-match dig at his squad and gained a reputation for slamming the attitude of his Tottenham side during his time in north London.

He issued a similar assessment of his former club’s lacklustre draw with West Ham United back in 2020, with Manuel Lanzini’s last-gasp equaliser completing a remarkable comeback for the visitors after finding themselves three goals down inside the first 20 minutes.

“My guys were not strong enough to cope with it psychologically, the last few seconds we lost two points,” said Mourinho.

“Of course I have to analyse the second half and have to do it internally, but for you I prefer to say football happened, and praise West Ham’s belief. It is not easy to be losing 3-0 and be dominated, to keep the belief.

“I knew they are a different team to last season, but to lose an advantage of three goals is a big punishment and eventually deserved. We should be stronger.”

Mourinho will be desperate to help his Roma side return to winning ways in their next outing against Cagliari on Sunday.