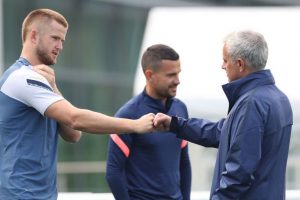 Jose Mourinho has conceded it was wrong to claim Eric Dier’s struggles are down to an issue with confidence.

The England international has been dropped twice by the Tottenham manager in recent weeks after making high-profile errors against Liverpool and Chelsea.

Spurs have lost five of their last six Premier League games, with Dier coming in for a fair share of criticism.

Ahead of this weekend’s clash with Burnley, Spurs sit nine points off a coveted top-four place and Mourinho has admitted that it likes his players to retain their confidence despite on-field struggles.

But speaking earlier this month, he said of Dier: “Players have moments. They can be very good, they can be strong personalities, they can be experienced, they can cope with a mistake but in the end, they are men.

"And they feel more than anyone else these little moments of confidence, of crisis.

“I have to admit that recently our team makes little important mistakes that are punished in terms of our results. And Eric was there, he was one of them. They feel it. And I believe confidence, that drops a little bit."

The 27-year-old quickly hit back, telling The Guardian: “Confidence-wise, I don’t feel like I’ve been in a bad place all season.

“I’ve gone through periods where I’ve had low confidence in the past so I know what it feels like and I haven’t felt that this season. The most important thing is the reality, and people’s perception versus reality can be different sometimes."

And in response to those comments, Mourinho stated that he admires players who do not suffer from crises of confidence and retracted his original assessment.

“ I prefer players with big personality, like the player who missed two penalties in a row but still has the confidence to be the penalty taker. And on the third penalty he gets the ball to try again.

“So I'm very happy that it's not a mental situation, not a psychological situation. I'm really, really happy with that.”