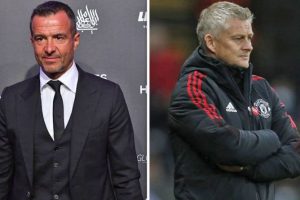 Jorge Mendes wants Manchester United to replace Ole Gunnar Solskjaer with Julen Lopetegui, reports say. The Norwegian lost his job at Old Trafford on Sunday just hours after their 4-1 defeat to Watford. And the Red Devils are now looking ahead to the start of yet another new era.

“Ole will always be a legend at Manchester United and it is with regret that we have reached this difficult decision.

“While the past few weeks have been disappointing, they should not obscure all the work he has done over the past three years to rebuild the foundations for long-term success.

“Ole leaves with our sincerest thanks for his tireless efforts as Manager and our very best wishes for the future.

“His place in the club’s history will always be secure, not just for his story as a player, but as a great man and a Manager who gave us many great moments.

“He will forever be welcome back at Old Trafford as part of the Manchester United family.

“Michael Carrick will now take charge of the team for forthcoming games, while the club looks to appoint an interim Manager to the end of the season.”

And the Manchester Evening News say Mendes is keen for Lopetegui to take over at Old Trafford.

The super-agent, who represents Cristiano Ronaldo, has supposedly called on the board to go for the Sevilla boss.

Lopetegui has done well during his time with the La Liga side, rebuilding his career following a tricky spell with Real Madrid.

And Richard Arnold, who is expected to replace Woodward, is said to have been ‘strongly advised’ Solskjaer had to be dismissed.

Whether United actually try and entice Lopetegui to the club remains to be seen.

But several other candidates are being linked, too, in the wake of their decision to relieve Solskjaer of his duties.

Mauricio Pochettino, Erik ten Hag and Brendan Rodgers are all options despite being contracted to Paris Saint-Germain, Ajax and Leicester respectively.

Yet while Zinedine Zidane is available, the publication states United have downplayed interest in him.

Meanwhile, former United star Gary Neville has claimed he’s ‘had enough’ of the way the Glazers handle the club.

He told Sky Sports News: “They don’t have a plan for the next manager at this moment in time because obviously they wouldn’t be announcing that they’re appointing an interim manager until the end of the season, or that Michael Carrick would be coming in now.

“We’ve seen managers lose their jobs in the last few weeks – Nuno [Espirito Santo] and Dean Smith at Aston Villa – where there have been plans in place and ready-made replacements to come in. Manchester United haven’t got that plan.

“This is the third time now I think in the last eight years that a manager has been given a long-term contract or extension and lost their job within a few months. So the planning hasn’t been great.

“I’ve had enough of it to be honest with you.

“I’ve spoken too much about it over the last few years.