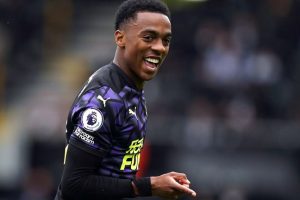 Newcastle have reached an agreement in principle with Joe Willock over personal terms.

The Arsenal midfielder is now set to travel to the North East for his medical, but he will need to be registered by 12pm on Friday if he is to face West Ham on Sunday, live on Sky Sports.

For three days Newcastle and Willock had been locked in discussions, with the two parties apart on personal terms up until Thursday morning.

Newcastle agreed a fee rising to £25m with add-ons at the weekend.

Willock has been Newcastle’s No 1 target all window following a successful loan spell in the second half of last season.

During his time at St James’, the midfielder scored eight goals in 14 appearances and set a new record by becoming the youngest player to score in seven consecutive games.

Newcastle boss Steve Bruce has made no secret of his desire to see Willock return to the club this summer, and said last month they would “keep badgering away” to secure his signing.

Next season’s League One campaign will finish on the weekend of April 30 2022, with League Two and the Championship on one of May 7 and May 8 respectively.