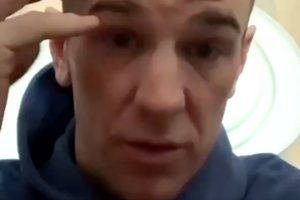 Joe Hart has apologised after his social media team posted that Tottenham got the ‘job done’ against Dinamo Zagreb after Spurs’ shock elimination from the Europa League on Thursday.

Jose Mourinho’s side threw away a two-goal lead from the first-leg to lost 3-2 on aggregate to the Croatian minnows, with the Portuguese coach hitting out at his side for lacking the ‘attitude’ required to win the game.

A video message from Hart on his Instagram said: “Morning guys, I feel like I need to make an apology on behalf of my social media team. It’s just been brought to my attention and I’ve just woken up.

“Someone thought that we had won 3-0 last night. As sloppy as it sounds, it is the truth. Posting ‘job done’ – that’s unacceptable.

“I’m sure that’s annoyed a lot of people and I’m sorry it’s come to that. It’s obviously not come from me, I’ve got nothing but love for the club and support for the team and I’m just as down as the boys are.

“Apologies, unfortunately this happens but just know that it didn’t come from any other place than a typo. Have a great day.”

Hart was part of the travelling squad that went to Zagreb for the Europa League last-16 second-leg with Spurs holding a two-goal advantage from the first tie in north London.

But Mislav Orsic’s hat-trick gave Zagreb a shock 3-0 second-leg win to dump Mourinho’s men out of the competition.

The Portuguese coach claimed that another mindset was needed from his Tottenham player and praised the Croatian minnows for their superb comeback on Thursday night.

“To say that I feel sad is not enough, because what I feel goes much further than sadness. I just left Dinamo dressing room where I went there to praise the guys, and I feel sorry that one team that is not my team won the game based on attitude.”