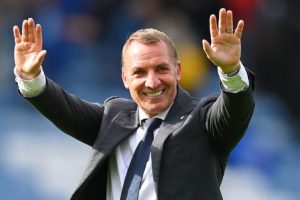 Chelsea icon Joe Cole has explained why Leicester City will be ‘peeved’ by Brendan Rodgers’ Manchester United comments. The Foxes boss has been tipped to take over at the Red Devils if the club gives Ole Gunnar Solskjaer his marching orders.

Rodgers was quizzed on the links to the United hotseat ahead of Leicester’s Premier League clash with Chelsea this weekend and didn’t categorically rule himself out of the running should the job become available.

“Firstly, it’s really disrespectful for you to ask the question when there is a manager in place at the club,” Rodgers hissed.

“Secondly, I can’t comment on it because it’s not real.

“I’m proud to be here at Leicester City. The only thing I’m thinking about is Chelsea and getting ready for that.”

The comments indeed left the door open for Rodgers to quit his Leicester role and move to the north west in the future.

And former England international Cole insists the Leicester chairman Aiyawatt Srivaddhanaprabha will be annoyed that Rodgers didn’t quash the rumours once and for all.

“When he was asked about the Man United job he came for the journalist a little bit,” Cole told BT Sport.

“He didn’t categorically say I’m staying here. I would be a little bit peeved if I was the Leicester chairman. There’s still a lot of work to be done here.”

Rodgers took over as Leicester boss in 2019 and led his side to a fifth-placed Premier League finish in his first full season at the helm.

Last term the Foxes finished fifth once again and also beat Chelsea to lift the FA Cup trophy in May.

But Rodgers has found the going much more difficult this season and the east Midlands team are languishing in mid-table after winning just four of their first 12 games of the season.

On Saturday afternoon they were second best throughout as they were defeated 3-0 at home to table-toppers Chelsea.

And they have now conceded more goals than any other side outside of the relegation places.

If Rodgers were to make the move to Old Trafford, it could also anger fans of United’s arch-rivals Liverpool.

The 48-year-old spent three years in charge of the Reds and almost led them to their first Premier League title in 2014.

Liverpool were in pole position to lift the trophy for much of the campaign but eventually finished second after taking just four points from their final three games.