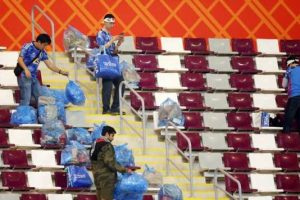 Gary Lineker hits out at BBC over past World Cup coverage

Japan fans have helped to tidy up the stadium following their nation’s shock 2-1 win over Germany at the World Cup. Japanese supporters have done the same at other games during the tournament and have been widely praised for their actions.

Japan completed one of the shocks of the tournament with their comeback win over Germany, with second-half goals from Ritsu Doan and Takuma Asano cancelling out Ilkay Gundogan’s first-half penalty.

In celebration, some Japanese supporters picked up bin bags and helped clean up the rubbish left behind by supporters at the game. It was not the first time they have helped to tidy up behind themselves after footage from the opening match of the tournament showed them doing the same.

The supporters were asked by a Qatari onlooker why they were helping with one fan responding: “We never leave, Japanese never leave rubbish behind us. We respect the place.”

Japan supporters have done the same at previous World Cups regardless of whatever the result is and regularly receive praise for their actions. They take their own bin bags to the match in order to ensure they can be on hand to help out once the action has finished.

The win was one of the biggest in Japan’s footballing history and sparked wild scenes after the match. Asano was the hero with his cool run and finish beyond German captain Manuel Neuer sealing the win for his side.

After the match, the nation’s manager Hajime Moriyasu praised fans for their support in Qatar.

“The players came together as one team, we prepared well and we stuck in there, and that’s what led to the win,” he said. “Lots of our fans have come to Doha and they were behind us pushing us on. I want us to keep a level head after this and look at what we could have done better and look to win the next match.”

The mood in the Germany camp was understandably more sombre, with the four-time world champions already staring down the barrel of a second consecutive group stage exit.

Gundogan argued they made things too simple for Japan in his post-match interview as he berated his side’s efforts.

“We made it too easy for Japan. I don’t know if an easier goal has ever been scored at a World Cup,” Gundogan told German broadcaster ARD TV. “This must not happen to us.”