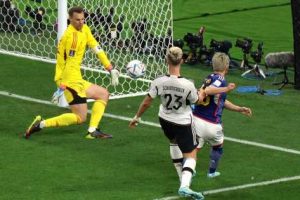 Germany have lost their opening World Cup clash for the second tournament in a row after Japan staged an incredible comeback.

The Germans had taken the lead through an Ilkay Gundogan penalty in the first-half, and Hansi Flick's side had been in the driving seat heading into the second half. However, after Germany lacked a cutting edge, Japan grew in confidence as the game ticked past the hour mark.

Germany are now in real trouble, and could crash out of the group stage of a World Cup for the second time in two editions.

Flick's side now face a must-win clash in their mouth-watering encounter with Spain on Sunday evening (November 27). Should Spain dump Germany out of the World Cup, by the time 2026 rolls around it will have been over a decade since the Germans graced the knockout rounds.

Spain and Costa Rica are the other two sides in Germany's group, and they face each other on Wednesday (November 23) afternoon.

What did you think of Germany's performance? Let us know in the comments section

Japan themselves are bouncing back from World Cup heartbreak in 2018, when they looked to be cruising to a 2-0 win against Belgium's golden generation.

However, three late goals saw Belgium spin the game on its head – dumping Japan out.