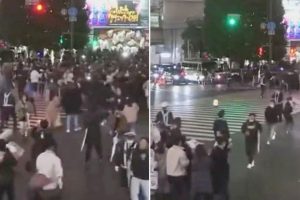 Courteous Japan fans took to the streets in droves to celebrate their nation's emphatic victory over Germany – but scattered when traffic lights turned green.

Japan stunned the world when they trumped Germany 2-1 in Qatar on Wednesday afternoon. The Germans took an early lead but were rocked by two late goals from the East Asian minnows.

Ilkay Gundagon opened the scoring for the Germans with an early penalty, and they seemed to be on the verge of picking up three points until Ritsu Doan equalised in the 75th minute. And his strike was followed up by team-mate Takuma Asano's goal in the final ten minutes of normal time.

And Japan's supporters danced in the road triumphantly after the surprise victory, only to disperse when the traffic lights went green to allow cars to pass. Their graceful behaviour was praised on Twitter, with one fan saying under the post shared by football journalist Jeremy Arnold: "Most civilised country on earth."

Another user added: "Japanese are hundred years ahead of this generation." And a third gushed: "Man they are so likeable." The Japanese collective may have missed the light change if they copied German defender Antonio Rudiger's running style.

Do you think Japan will qualify for the knockout stages at the World Cup? Let us know in the comments section below.

Thecentre-back was compared to Forrest Gump when he decided to break into a bizarre run during the Group E clash. But it is not the first time Japan's fans have displayed commendable behaviour at the World Cup, they were spotted cleaning up in the stands after Qatar's match against Ecuador, despite the game being nothing to do with them.

Their actions left match goers baffled, and one who interacted with the Japanese relayed the reason why they choose to be so clean. He said: "The Japanese fans decided to clean the stadium. It’s not even their match!

When I asked them, ‘Why are you cleaning something not related to you?’ The answer was, ‘Japanese never leave rubbish behind us. We respect the place'."