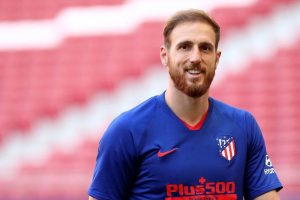 Atletico Madrid goalkeeper Jan Oblak hasn't ruled out a move to the Premier League but insists it would have to be for the right manager.

Oblak has been at Atletico since 2014 but he is being linked to English clubs Manchester United and Chelsea.

He does have two years left on his Atletico contract and a £102 million release clause.

So while the transfer may not be on the horizon just yet, it's clear there is interest in the keeper and his stats speak for themselves as to why.

Throughout his time at Atletico the 28-year-old has only conceded 209 goals and has kept 157 clean sheets in 298 appearances. He has also been also named La Liga's best goalkeeper four times.

He told BBC Radio 5 Live's Football Daily podcast: "The Premier League has strong teams. Maybe the strongest. But I think in the end it is what the coach is asking of you. You listen to his instructions.

"You are one of the 11, so you do what he asks of you. All the players on the pitch are thinking like that. It doesn’t matter if it’s the Premier League, Italian league, Spanish league, wherever you go you need to do what the coach is asking you to do."

When asked about the possibility of a Premier League move, Oblak replied: "I don’t know. I don’t know what the future will bring, but I am sure that in any league I would play I could play well. You never know what will happen in the future.

The Slovenian star added his top priority is not sustaining any injuries and then he would see what the future would bring.

His immediate future brings a La Liga fixture against Elche on Saturday afternoon.

Real Madrid, Barcelona and Seville have all closed in on the club who held a ten point lead earlier this season, but Atletico still hold a slender lead at the top.

Just three points separate the top four and so the last five rounds of the league will be of huge importance.