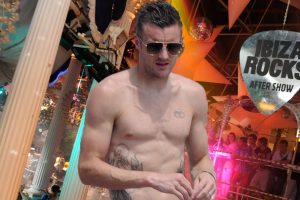 Foxes striker Vardy is one of the most prolific goal scorers in Premier League history, and picked up the Golden Boot last season with 23 goals.

But things haven’t always looked so rosy for the 34-year-old ex-England international.

Vardy joined Leicester back in 2012 for £1m from Fleetwood when they were languishing down in the Championship.

He scored just five times in his first season in the East Midlands, and former team-mate Marshall admits that Vardy was genuinely considering packing football in to change scenery.

Speaking to YouTube channel Under The Cosh, Marshall revealed that Vardy had an offer on the table to go out and become a rep in Ibiza which he was keen on.

"I remember when he was saying he's going to jack it in and go away,” recalled Marshall.

“He had a job offer to go over to Ibiza and be a rep. He was all over that. He'll tell you that himself."

This is not the first time Vardy’s affiliation to the Ibiza nightlife has been mentioned.

Former Leicester manager and long-term coach Craig Shakespeare admitted his relief that he persuaded Vardy to stay and become a world class footballer rather than party in Spain for a living.

"Our job is to support players. Sometimes they do have self-doubt and Jamie would be the first to admit he was going through a rough patch,” Shakespeare said in 2017.

"Myself, Nigel [Pearson] and Steve [Walsh] were here to support him. All we did was told him about his attributes and that we thought he could go on.

"We even mentioned then about not only playing in the Premier League but also he had the attributes to play for the national team. We told him we wanted him and believed in him.

"Thankfully he didn't go to Ibiza. I think he has made the right decision!"