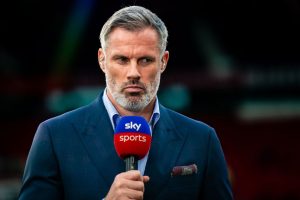 Jamie Carragher has admitted he is shocked and worried after Liverpool announced two high-profile departures from their backroom staff on Thursday.

Both Sporting Director Julian Ward and Director of Research Ian Graham will step down from their roles at the end of the season in a major Melwood shake-up. Graham, who joined the Anfield outfit in 2012, currently heads a six-person team handling data and analytics whilst Ward handles transfer dealings and the renewal of player contracts, such as Mohamed Salah's bumper new deal.

Ward succeeded Michael Edwards, the man credited with Liverpool's recent success in the transfer market, last summer but it's now understood he is keen for a break from football following over a decade at the club.

Leaving in a similar fashion to his predecessor, ex-Reds defender Carragher, who made over 700 appearances for the club, has acknowledged Ward's shock departure is "a little bit of a worry" for his former side.

HAVE YOUR SAY! Will Liverpool claim Champions League football next season? Let us know in the comments section below

Taking on the role from Edwards in the summer, Ward was also responsible for much of Liverpool's transfer activity in the January window, which included snatching Brazilian wizard Luis Dias away from Tottenham Hotspur.

Then thwarting arch-rivals Manchester United in the race to sign Darwin Nunez, the Reds' continued success in sealing their top targets has been the envy of the Premier League. And Carragher is hopeful the legacy of Edwards and Ward will continue with Liverpool's next appointment.

He added: "There seems to be a lot of upheaval behind the scenes in terms of the ownership, Michael Edwards has moved on, Julian Ward came in to replace him, and now he’s gone as well.

"I don’t think it would be easy to get someone straight away and if it is unexpected for Liverpool and it has come as a shock, I’m sure they’re not prepared for something like that right now.

"But, someone will fill that role and hopefully they have as much success in that role as Julian Ward and Michael Edwards have had in the past."