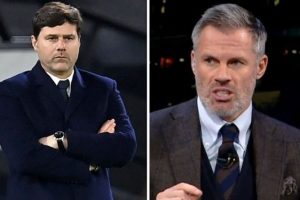 Jamie Carragher believes Manchester United are not as far behind Liverpool and Manchester City as some people think. Carragher reckons United would be a “brilliant” job for any manager and has backed Mauricio Pochettino to leave Paris Saint-Germain for Old Trafford.

United are searching for a new manager following the dismissal of Ole Gunnar Solskjaer last weekend.

Michael Carrick has been placed in temporary charge as the club look to find a successor.

United say they plan to appoint an interim manager until the end of the season.

However, reports say top target Pochettino would be open to leaving PSG now.

United have not won a trophy in over four years and have not challenged for the Premier League title since the retirement of Sir Alex Ferguson in 2013.

But Carragher admits the Red Devils are a more attractive prospect than some believe.

He said on CBS Sports: “I think it’s a brilliant job to take, for anyone. I really do.

“You’re not going to go into a top club where everything is perfect.

“But Manchester United are going to have money to spend. Ole spent more than anybody in the Premier League, Jose Mourinho spent as much as anyone before that.

“It’s a huge club who haven’t done well for a long time, so there’s a lot for you to achieve.”

Carragher reckons Pochettino will leave PSG no matter what next summer.

And he has urged him to do what he can to get himself to United because the gap to rivals Liverpool and City isn’t too big despite recent defeats.

Carragher added: “I think whether the Manchester United job is there or not for Pochettino, I don’t see Pochettino in Paris Saint-Germain next season.

“I don’t think he’s 100 per cent enjoying it, and I’m only going off his quotes last week, just reading between the lines.

“And also that job as well, if he doesn’t win the Champions League or go close this season, they’re probably looking for another coach anyway.

“I think he would get at least this season and another two at Manchester United no matter what happens, he’d have money to spend, and I don’t care what anyone tells me, Manchester United have very good players and a good squad there.

“Not City or Liverpool just yet but it’s not that far behind and I don’t think it’s as big a job to get them to challenge for the title or the Champions League as maybe people think.

“And if I was him, and I had the opportunity, I would go for it.”