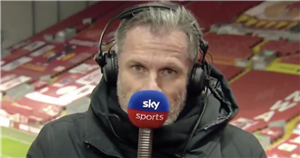 Liverpool boss Jurgen Klopp will need to alter his midfield plans should the Reds get back to their Premier League title winning form during the 2021/22 season.

That is the view of Jamie Carragher, who believes that his former side need someone to take up a pressing role that is similar to the one utilised by Philippe Coutinho during his time at Anfield.

Although the former England defender isn’t telling his former side that they need to break the bank for a No. 10, he does think their system needs a rethink.

Since Coutinho left the club for Barcelona, Klopp has favoured a midfield trio which has usually included Fabinho, Jordan Henderson and Georginio Wijnaldum.

"I watched Gini Wijnaldum in the second-half get done on a one-two, they want to do things and they just can’t quite get there," Carragher told Sky Sports.

"I don’t know if it’s the same players playing week-in, week-out, maybe on the back of four or five years of high-intensity football. No crowd. Who knows what it is?

"We’ll maybe only really get to the bottom of it more next season when we see the crowds back and maybe more of a normal season but they just don’t seem there in terms of energy and pace right at the moment.

"Jurgen Klopp famously said, his pressing is better than any number 10, but when you watch Liverpool, you almost feel like they need a number 10 – they need that type of player because the pressing is not quite there.

"Teams have come and defended deep and they haven’t really got anyone between the lines to play that pass, they have Coutinho who went and they built in other areas. But that type of player.

"I’m not saying they should go and buy that, but without the actual pressing quality they have now in terms of creating chances, they haven’t really got anyone who can make that final pass.”

Klopp said after his side slipped to a fifth consecutive home defeat in the Premier League: “The individual quality of Mason Mount in that moment made the difference.

“It was a tight game, intense game. Both teams invested a lot.

“They had the goal they scored which was offside. The second half another counter attack, we had more situations around, the great one with Sadio Mane and other situations where we did not score.

“You have to defend differently and we didn’t do well there. There are a lot of things out there you have to consider.”