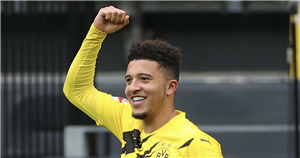 Borussia Dortmund and England star Jadon Sancho is reportedly open to a move to Spain, according to reports.

The 21-year-old is likely to leave Germany this summer after spending four years at the Westfalenstadion.

Manchester United are top favourites to sign the winger after showing interest in the player for the best part of two years – he has reportedly been Ole Gunnar Solskjaer’s top priority since he joined the club.

According to The Times, however, Sancho would be willing to give the Spanish LaLiga a try, with Barcelona and Real Madrid likely to be top favourites for his signature.

Both clubs will be handicapped by the apparent asking price, which could be as high as £80m – something Spanish football’s top brass won’t be able to afford due to their poor financial conditions.

Factor in the Super League sanctions and the potential ban from the Champions League from UEFA and this could become an even more difficult task to complete.

United, meanwhile, don’t quite have the same problems and should be in pole position to complete the signing.

They missed out last summer despite knowing Borussia Dortmund’s asking price and deadline to match the offer and the Red Devils hoped to negotiate the fee even further to benefit them.

Nothing materialised, however, and they will have to go again this summer.

Reports from Germany have suggested that Manchester United have opened talks with the Germany club but no official bid has been made.

Meanwhile, reports from Sancho’s camp suggest that the player wants more clarity on his future before England kick-off at the Euros and there is optimism that a deal can be struck.

Sancho joined Dortmund from United’s local rivals, Manchester City and has scored 50 goals in 137 appearances for them.

Where do you think Jadon Sancho will be playing next season? Let us know in the comments below.

He even scored twice in their DFB Pokal win over RB Leipzig in May, which was his first major trophy at the club.

Any sale from Dortmund would result in a fee being paid to City, as a clause in his contract pointed out that the Premier League champions are entitled to a 15% sell-on fee.

That could result in Manchester United’s money going to City’s funds in some form if a deal is struck.