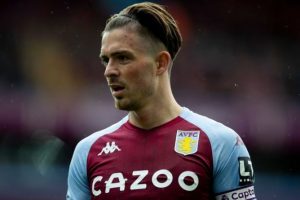 Jack Grealish has been told nothing is stopping him sealing a big-money move away from Aston Villa this summer as uncertainty surrounding his future grows. The 25-year-old midfielder is in high demand and has attracted interest from the likes of Manchester City and Arsenal in the transfer window.

Grealish is understood to be one of City’s top two targets, alongside Harry Kane, and is believed to be valued at around the £100million mark.

It remains to be seen as to whether or not Villa’s star man decides to stay put at his boyhood club or if he will seek a new challenge ahead of the new season.

Former Liverpool and England midfielder Danny Murphy has suggested an opportunity to make such a move may not come around again for Grealish, adding that the talented midfielder must be “proactive” should he want to force an exit.

“Jack can do what he likes,” Murphy said on talkSPORT.

“He can knock on the door and say ‘I want to go now and win trophies and play in the Champions League.’

“He is hot property at the moment, he is at the peak of his powers and the problem is, in football, it’s very hard to have a longer-term view as a player.

“Generally you do get advised with a consistent message, is take what you can when you can because you don’t know that in a year you could do your knee, you could have a dip in form, Jack Grealish all of a sudden isn’t worth 90 or 100 million,” added Murphy.

“He might not get a Man City opportunity again, so actually, Jack doesn’t need to sit tight if he wants to move, he’s got to be proactive.”

Grealish signed a new contract at Villa back in September as Dean Smith’s side attempted to fend off outside interest.

Despite only recently extending his stay at the club until 2025, the Telegraph have reported that Villa are prepared to offer the England international a new one-year extension to take his wages over the £150,000-a-week mark.

Man City are still considered favourites to secure the services of Grealish, and Villa fans are all too aware of what it’s like to lose a club captain to the Sky Blues ahead of a Premier League season.

Fabian Delph penned a four-year extension in January 2015, only to sign for City six months later despite repeatedly expressing his loyalty to the West Midlands club.

“I am a loyal person and committing my future will hopefully show everybody what type of guy I am,” said Delph after extending his stay at Villa Park.

He added: “I feel like this is me – I love the club, I love being here and I want to put 100% into everything I do here. This is my club and I want to be here. That’s why I am committing my future.

“There was no way I was going to bail out. I am here for the long run.”