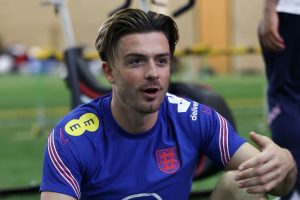 Aston Villa and England midfielder Jack Grealish ‘has a preference’ in his decision over a Manchester City or Manchester United transfer this summer.

The 25-year-old has enjoyed an impressive season with the West Midlands side, recording seven goals and 12 assists to earn a place in Gareth Southgate’s Three Lions squad for Euro 2020.

It has seen the Red Devils, who had chased the midfielder last summer, continue their interest in the Villa Park captain.

While Premier League champions City have emerged as contenders following their latest Champions League failure in the final against Chelsea.

But The Athletic have reported that the midfielder has now made a decision on where he wants to play next season.

Out of the two Manchester clubs, Grealish ‘prefers’ the Etihad Stadium side having leaned towards Ole Gunnar Solskjaer’s team the previous summer.

The Englishman has been at Villa since 2001, aged just six years old, before making his debut 13 years later in a 4-0 defeat to the very same side he would now like to join.

Scoring 32 goals in more than 200 appearances, his role in Villa’s 11th-placed finish this season has seen speculation emerge Pep Guardiola may sanction an exodus to fund a deal for him.

Should Jack Grealish move to Man City or Man Utd? Let us know in the comments section.

This is due to an expected large release clause in Grealish’s contract with the club, which was extended by five years last September.

But former City defender Micah Richards backed his side to complete the transfer of the midfielder last month, rating him higher than the current crop of the champions’ stars.

He said: "If they signed him, their fans would soon be thinking 'why didn't we get him earlier?' because he would give them something different, even with the top quality players they already have in those positions.

"Phil Foden, for example, is a very special talent but I don't think even he could do quite what Jack has done at Villa in the past few months.

“With Jack at Villa, he always has to make something happen on his own, and often does. He can turn a game on its head with his dribbling as well as his delivery, and he is just top notch in tight spaces.”