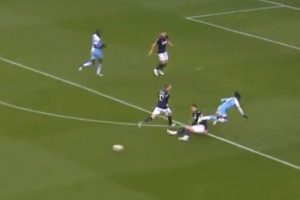 ITV Sport commentator Clive Tyldesley was forced to apologise for “obscene language” that was picked up by microphones during coverage of Millwall’s FA Cup clash with Crystal Palace.

Palace travelled to the New Den in the third round of the cup on Saturday, to be welcomed by Millwall’s infamous support.

The Championship side took a shock lead 17 minutes into the clash when Jack Butland delayed a clearance and was tackled by Benik Afobe in the box.

The Millwall striker then slotted the ball into the net to put Gary Rowett’s side in front against what was a strong Palace line-up.

But it was an incident in the stands that caused the most controversy when Palace star Michael Olise was fouled.

The ITV microphones picked up the chant loudly, forcing Tyldesley to make an apology to viewers who heard the “obscene language”.

Broadcasters are compelled to apologise for any instance of foul and abusive language due to OFCOM rules.

Who will win the FA Cup this season? Let us know in the comments section.

However, many viewers on social media were left amused by the Millwall fan's chant, despite Tyldesley’s apology,.

“All I heard then on itv is a bloke in the crowd singing ‘let him die let him die’,” one wrote along with three laughing face emojis.

“Heating someone chant “let him die” near the microphone, the magic of the cup haha,” another tweeted.

“Millwall fan going ‘Let him die, let him die’ all on his own. Magic of the cup right there” a third fan added.

Millwall took their 1-0 lead into the break, as they sought to reach the fourth round of the FA Cup for the sixth successive season.