Home » Soccer » ‘It was not a gift’: Dele Alli ‘deserved to start’ against Fulham, Jose Mourinho insists

‘It was not a gift’: Dele Alli ‘deserved to start’ against Fulham, Jose Mourinho insists 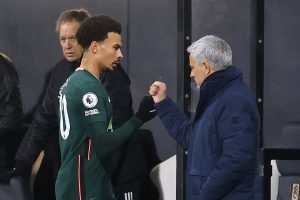 Jose Mourinho praised Dele Alli and insisted he “deserved to start” the win over Fulham on Thursday night.

The 24-year-old midfielder made his first start in the Premier League for six months and played a key part in the only goal of the game, a Tosin Adarabioyo own goal in the first-half.

Alli has been more of a feature in the Europa League and Mourinho says his hard work in that competition and on the training pitch is now paying off.

“He deserved to start. It was not a gift. It was a consequence of his work since he came back and working 100 per cent,” the manager said afterwards.

“He was deserving. We need the squad we have.”

Mourinho had to watch his side hang on in the second half as they defended their first-half lead.

There have been many occasions this season where Spurs have squandered an advantage, but they held firm to earn an important win that keeps their top-four hopes alive.

“Important win. Of course we need points and of course three better than one,” Mourinho said, who introduced Lucas Moura, Moussa Sissoko and Erik Lamela in place of Gareth Bale, Dele Alli and Tanguy Ndombele as Fulham pushed hard for a second-half equaliser.

“I believe that we really showed from the first minute that we were coming for that. The first half was a good half for us.

“Second half was harder. They put some pressure on us but I believe that when we made the changes we brought a new energy and dynamic into the team. We brought the danger to the other side.

“Even being a solid block to defend we were the team with the best chances to score in the last 10 minutes.

“There was Lamela dribbling the ball, Harry (Kane) face to face with (Alphonse) Areola and we took good control of the game in the last 10-15 minutes, the control that we lost in the 15-20 in the middle of the second half but in the end of course three points for us and very important.”