Home » Soccer » Is Tottenham vs Crystal Palace on TV today? Kick-off time, channel and how to watch Premier League fixture

Is Tottenham vs Crystal Palace on TV today? Kick-off time, channel and how to watch Premier League fixture 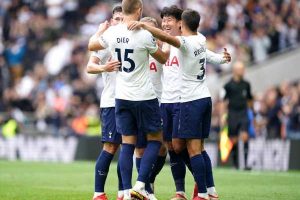 Premier League leaders Spurs meet London rivals Crystal Palace at Selhurst Park this weekend, with the away side looking to overcome some significant setbacks to maintain their 100% record.

It’s been a week defined by travel restriction drama, following on from the debacle of the Brazil v Argentina World Cup qualifying match. The bureaucratic nightmare of players returning from South America has left several clubs – Tottenham included – without some of their star names heading into this weekend’s round of fixtures.

Nuno Espirito Santo won’t be able to select defenders Davinson Sanchez or Cristian Romero, who are yet to return to the UK from Colombia and Argentina respectively. The same applies to Giovani Lo Celso, who is also unavailable for selection.

With Heung-min Son an injury doubt for the visitors, Palace will surely sense an opportunity to get their first win over Spurs since 2015 – especially with captain Luka Milivojevic finally returning to full fitness.

Here’s all you need to know ahead of this weekend’s Premier League fixture.

The match will be broadcast on BT Sport 1 and BT Sport Ultimate, with coverage beginning at 11:30am. BT Sport subscribers can stream the game via the BT Sport app.

Palace new boy Michael Olise could be available for selection after joining the club from Reading this summer.

A back injury had previously ruled the 19-year-old out of action, but a two-week international break may have been enough time for the midfielder to make a full recovery.

Luka Milivojevic has also been recovering from a setback over the international break, raising hopes within the club that he will be able to make his first appearance of the season on Saturday.

Spurs, meanwhile, have fallen victim to the South American travel rules, as Giovanni Lo Celso, Cristian Romero and Davinson Sanchez will not be available for selection after linking up with the Argentinian and Colombian squads respectively.

Heung-min Son also picked up a slight calf injury while on international duty for South Korea, making him a doubt for the Palace trip.

Spurs may be low on goals so far, but they have balanced that out by remaining solid and compact defensively.

Palace, by contrast, will be boosted by home advantage as well as their encouraging display at the Olympic Stadium last time out.

With that, and Tottenham’s player shortage in mind, all signs point to a draw.