Home » Soccer » Is Poland vs Slovakia on TV? Kick-off time, channel and how to watch Euro 2020 fixture

Is Poland vs Slovakia on TV? Kick-off time, channel and how to watch Euro 2020 fixture 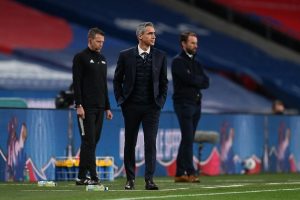 Poland’s performance in the Euros is difficult to predict due to their recent change in managers.

Paulo Sousa came in for Jerzy Brzeczek ahead of the World Cup qualifiers in March where they produced a 3-3 draw against Hungary and a 2-1 defeat to England.

This makes their group even more interesting in what is already a tight affair as Poland will take on Slovakia, Spain and Sweden.

Sousa’s team will start their Group E campaign against Slovakia later this afternoon.

Forwards Krzysztof Piątek and Arkadiusz Milik are injured and so won’t be available for the match but Poland will be hoping their captain Robert Lewandowski will be enough fire power after his historic goalscoring exploits with Bayern Munich this season.

Here is all you need to know about the match.

Euro 2020 kits: Every home and away shirt ranked and rated

Euro 2020 schedule: All dates, fixtures and everything you need to know

What time is the match?

Where can I watch?

The match will be shown on ITV and coverage will start at 4.15pm. There will be a live stream via the ITV Hub.

For Poland, they are without Krzysztof Piątek and Arkadiusz Milik through injury.

And for Slovakia, Marek Hamšík’s fitness is questionable due to injury but he is set to feature in the match.

If Lewandowski is on form Poland should bag the win over Slovakia to kickstart their campaign perfectly. The score won’t be high but Poland will happily take the victory. Poland 2-0 Slovakia.