Home » Is Burnley vs West Ham on TV tonight? Kick-off time, channel and how to watch Premier League fixture

Is Burnley vs West Ham on TV tonight? Kick-off time, channel and how to watch Premier League fixture 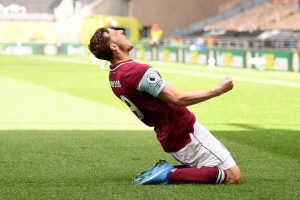 West Ham will aim to put back-to-back Premier League defeats behind them and reignite their top-four challenge when they travel to Burnley this evening.

David Moyes’ side were defeated 1-0 by Chelsea last weekend to lose further ground in the race for the Champions League qualification after being beaten 3-2 by Newcastle the previous weekend.

Chelsea’s 2-0 win at home to Fulham on Saturday left the Hammers six points adrift of the top four with five fixtures remaining, but the east London side can maintain their European ambitions with three points at Turf Moor.

Burnley look to have secured their Premier League status for another season thanks to a 4-0 win over Wolves last weekend, and are nine points clear of the drop after Fulham’s defeat to Chelsea.

Here’s all the information you need to know ahead of the match tonight.

The fixture will be show live on Sky Sports Main Event and Premier League, with build-up starting from 8pm. If you’re not a Sky customer you can grab a NOWTV Day Pass here to watch without a subscription.

Burnley could welcome Ashley Barnes back into the side for the first time since February after recovering from a thigh problem. The Austrian was on the bench against Wolves last weekend but did not play, so he could be fit enough to play a part against West Ham. Johann Berg Gudmundsson is also in line to return, but Kevin Long and Robbie Brady remain out.

West Ham are set to be boosted by the return of Declan Rice from a knee injury. The midfielder has missed the past four games after picking up the injury while on international duty with England, and the Hammers have been fragile in defence ever since. Arthur Masuaku could also return, while defenders Craig Dawson and Fabian Balbuena are available. Striker Michail Antonio remains out with a hamstring injury.

While Burnley are flying after their 4-0 win at Wolves last week, West Ham will be boosted by the return of Rice and are desperate for three points to keep their fight for European qualification alive. Burnley will cause them problems, but West Ham should have enough to get the win. Burnley 1-2 West Ham