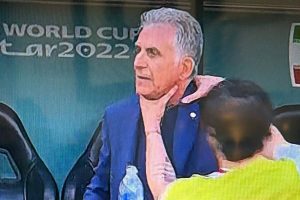 Carlos Queiroz's neck muscles may not be thanking Ramin Rezaeian for his 101st-minute goal in Iran's 2-0 victory over Wales with star man Sardar Azmoun shaking his manager's neck to celebrate.

Following a 6-2 drubbing against England on Monday afternoon, Iran's hopes of advancing to the knockout stage of the World Cup took a gigantic leap forward with two late goals at Ahmad bin Ali Stadium to break Welsh hearts.

Despite claiming just 29% of possession, the Middle Eastern outfit created far better chances than their European counterparts and could count themselves unfortunate that the score was still level by half-time.

But Queiroz's side capitalised on a reckless challenge outside the area from Wayne Hennessey, for which the Wales 'keeper received the first red card of the tournament, with Roozbeh Cheshntermi netting a scorching effort from 25 yards in the eighth minute of stoppage time.

With the fourth official signalling nine additional minutes, Wales pushed heavily in the dying embers of the contest. And with men committed forward, Joe Allen's loose touch allowed Iran to spring a counter-attack.

HAVE YOUR SAY! Do you think England will seal a spot in the round of 16 against the USA? Let us know in the comments section.

And while a host of Iranian players invaded the pitch or punched the air, Azmoun took his celebration to a whole new level by grabbing his manager's neck and shaking it back and forth.

Yet the former Manchester United assistant didn't seem to mind too touch with a gleeful smile adorned across his face before several Iran players joined a team huddle on the touchline.

After the game the squad lifted Queiroz into the air, commemorating just a third World Cup finals victory for Team Melli. Iran face the USA on Tuesday evening with a place in the Round of 16 firmly in their sights.