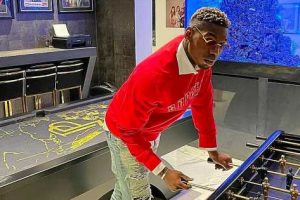 As Paul Pogba closes in on a Juventus return, he'll be leaving behind mixed memories with Manchester United – and one colossal mega-money mansion.

The French midfielder has experienced a turbulent time with the Red Devils during his two stints at Old Trafford. Having left the club for Juventus under a cloud back in 2012 amid fractious negotiations between United manager Sir Alex Ferguson and his agent Mino Raiola, Pogba then completed a sensational return four years later in a whopping £89million deal.

However, his homecoming hasn't gone to plan. Having struggled to consistently produce his best at United and failed to inspire the club to significant success, the 29-year-old has come in for some heavy criticism over the past six years.

And now, having snubbed United's attempts to tie him down to a new deal, the World Cup winner will depart for free, for a second time. The maverick midfielder is close to sealing his Manchester escape as he closes in on a return to Turin and a subsequent fresh start, but the move will see him forced to leave behind his mouth-watering mansion.

Purchased back in 2017 for a mammoth £2.9m, the Cheshire-based five-bedroom house is lavish to say the least. And it contains almost everything you could wish to have in a dream home.

Pogba has posted several videos of himself in the eye-catching abode to his Instagram, which includes the luxurious 'P.P. ARENA' – an incredible indoor football pitch equipped with mini goals, LED lighting and an electronic scoreboard. The pitch even features the player's brand logo on the centre circle.

How would you sum up Paul Pogba's second stint with Manchester United? Tell us in the comments section below

But that's not the only area of the house devoted to helping the midfielder keep in tip-top shape. "I have a little home gym in my house," Pogba revealed to United's club website back in 2020 as he opened up how he ensured he retained fitness during the pandemic-enforced break in football that year.

"I can do some training, some running, some bike, go outside and do some things with the ball. I am just keeping busy and keeping healthy."

And that's not all. The flamboyant Frenchman's fancy establishment also features a stunning indoor swimming pool and plenty of other areas to unwind.

Pogba also has a personalised black and gold table football setup. The midfielder, who has previously uploaded footage of him playing alongside former United team-mate Zlatan Ibrahimovic, posted a posey pic of himself leaning on the table back in 2021, accompanied by the modest caption: "Did you know that I’m (practically) a pro on foosball?!"

The eye-opening snap also offered insight into the other extraordinary features of his games room. These included a plush personalised pool table, a mix of wall-mounted memorabilia and a gargantuan aquarium.

The custom cladding doesn't end there either. Pogba's place also contains a gleaming chess set with his initials in gold writing, and even the cushions in his lounge have been emblazoned with his 'PP' logo.

However, the dream home will soon be vacated by Pogba, his wife Maria Salaues and their son, Labile when they soon seal a return to Italy. United are understood to have tabled the Frenchman two mega-money contract offers in the last year, however, Pogba rejected both as he sought to seal his Old Trafford exit upon the expiry of his current deal.

Despite United tabling the midfielder two extensions worth in excess of £300k-a-week, Pogba was seen to blast the club for "offering him nothing" within eye-opening scenes from his upcoming Amazon Prime documentary, 'Pogmentary'. Following an extraordinary exchange with his recently-deceased agent Raiola, in which the Italian informed his client of the club's most recent offer, Pogba sensational took at swipe at his now ex-employers.

"They're bluffing," he replied. "How can you tell a player you absolutely want him and offer him nothing? Never seen that."