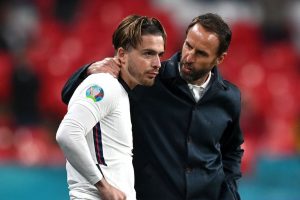 Southgate came under fire for not starting the England playmaker in either of England’s two opening Euro matches but the Athletic reports there is more to be considered than merely Grealish’s outstanding talents.

The two are said to share an amicable relationship ahead of England’s third and final group stage game against Czech Republic but underlying issues exist which may prevent Grealish from having a bigger role this tournament.

People with close knowledge of the situation cite a number of reasons why Grealish has not yet been trusted on the biggest stage.

Potentially the main barrier holding Grealish back from starting is the pair’s apparently contrasting views of the Villa captain’s best position.

While Southgate has commented that Grealish needs to prove he can ‘challenge’ players like Marcus Rashford and Raheem Sterling for the left-wing spot, Grealish openly stated he is more of a creative midfielder.

With Sterling being one of Southgate’s more trusted and experienced players, it is unsurprising Grealish only has a supporting role when he is type-casted to the left flank.

Southgate has more recently given the 25-year-old opportunities to play in the number-10 role, though these came in low risk games prior to the competition and he still holds reservations over Grealish’s work-rate.

Do you think Grealish is Southgate's most talented player in the Euros squad? Let us know in the comments section.

Grealish also reportedly fell out with his former England under-21 coach Aidy Boothroyd who was part of Southgate’s inner circle prior to the latter's ascension to managing the senior team.

The midfielder was left out of Boothroyd’s side throughout the under-21 European Championship for transgressions such as arriving late to team meetings.

Grealish reportedly believes this bad feedback, along with several other off-field incidents have counted against him.

He was notably branded a ‘Covidiot’ following his COVID-19 breach and subsequent car crash last year, though it’s unclear how much of a role these have played in Southgate’s decision-making.