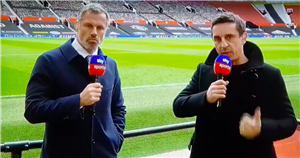 Jamie Carragher and Gary Neville frequently lined up as enemies during their playing careers, but the duo were united over their stance after supporters broke onto the Old Trafford pitch on Sunday.

The fan revolt meant Manchester United’s Premier League clash against Liverpool had to be postponed, but both Carragher and Neville shared sympathy with those responsible.

The punditry pair even spoke with some of those fans who forced their way into the stadium. Protests formed outside Old Trafford and the Lowry hotel, with United fans airing their dissatisfaction with the Glazer family’s ownership of the club following the failed European Super League breakaway.

Carragher, 43, wrote in his Telegraph column that he nor his colleague felt in danger from the protesters, who “felt their voices had been ignored for too long”.

He put: “On Sunday afternoon, I witnessed supporters from Manchester United echoing that mood of deep discontent to tell the world they have had enough of feeling their football club is not being run for them, but to line the pockets of the Glazer family who have failed to engage with their core fanbase for 16 years.

“I stood on the touchline at Old Trafford, shocked as a couple of hundred United supporters made it onto the pitch. I never felt threatened. There was a sense of revolt and mutiny within the stadium, not violence. Those fans who spoke to me and my Sky Sports colleague Gary Neville felt their voices had been ignored for too long and wanted to make their point in the most effective way possible, knowing the game was to be broadcast around the world.”

Neville said during Sky’s broadcast that the Glazers selling the club now would be “the honourable thing to do.” United were seen as one of the main promoters behind the European Super League, which would have seen 12 of Europe’s biggest clubs leave their respective divisions to form their own competition.

Liverpool were also among the 12 ‘founder’ clubs on course to form the ESL, and their owners, Fenway Sports Group, were derided for their role in the plans. Neville also referred to previous controversies—such as using a government scheme to furlough their players during the pandemic—as cause for concern.

United supporters gathered outside the Lowry—the club’s team hotel—in a display of defiance against the club’s current ownership.

Neville and Carragher spoke with a police officer pitchside at Old Trafford after he suffered a “significant slash” to his face amid the protests.

Carragher continued: “Gary and I spoke on the basis of what we saw and experienced. We did not have all the details of incidents outside the ground, or what might have been happening near the United team hotel which meant the safety of the players could no longer be guaranteed.

“Nevertheless, as an ex-Liverpool player and supporter, I was not prepared to go on live television and condemn United fans for being at the end of their tether when many of them have spent over a decade campaigning to raise awareness about how their club is run. I would be a hypocrite to do so.”

The Glazers completed their takeover of Manchester United in 2005. Fans have long expressed dissatisfaction with their running of the club, and the failed ESL venture looks like the final straw for many.

Flares and smoke bombs bearing green and yellow—a reference to United’s colours when they were founded as Newton Heath in 1878—could be seen throughout Sunday’s protests.

The Premier League is yet to announce plans for when the postponed clash between United and Liverpool could be rescheduled.

The Red Devils are preparing for the second leg of their Europa League semi-final against AS Roma and boast a 6-2 lead ahead of their visit to the Stadio Olimpico on Thursday.