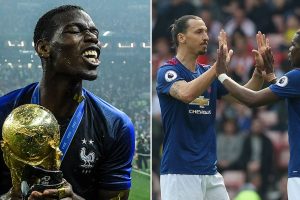 Former Manchester United midfielder Paul Pogba is set to visit the doctor of ex-team-mate Zlatan Ibrahimovic in an attempt to keep his World Cup dream alive.

Pogba, 29, brought to an end six disenchanted seasons at Old Trafford after snubbing the biggest contract in Premier League history, labelling it "nothing" in his Amazon Prime 'Pogmentary' doc.

Making his last outing in a 4-0 drubbing against arch-rivals Liverpool, the France international has now penned a four-year deal with former club Juventus but will miss the opening months of the season, following a meniscal injury to his right knee in pre-season, which is expected to require surgical treatment.

According to La Gazzetta dello Sport journalist Fabiana Della Valle, Pogba has left Juve's pre-season training camp in America and is now on his way back to Italy to meet Bertrand Sonnery-Cottet, a world-renowned consultant Orthopaedic Surgeon.

Sonnery-Cottet worked on the anterior cruciate ligament of Ibrahimovic's left knee, which saw the Swede miss 18 matches for Serie A champions AC Milan last term. Though the result might not have Pogba's desired outcome.

HAVE YOUR SAY! Was Paul Pogba right to snub a new deal at Man Utd? Let us know in the comments section below

The report states the rupture is in a particularly vascularised region of the meniscus and therefore an operation would see the midfield maestro sidelined for between three and five months – meaning he would miss France's World Cup campaign.

Pogba is understood to be unwilling to miss the chance of defending the football's most prestigious crown and is evaluating all other options before reaching a firm decision. The 29-year-old was advised to go under the knife in the United States to maximise his chance of aiding Juve to another scudetto but the World Cup is his utmost priority.

Pogba, club doctors, and France's medical staff are now all working in cohesion to find a solution that will enable him to play in the upcoming Qatar tournament.